Feb 17, 2010 Source: metronews.ca
Egypt's most famous pharaoh, King Tutankhamun, was a frail boy who suffered from a cleft palate and club foot. He died of complications from a broken leg exacerbated by malaria and his parents were most likely brother and sister.

Two years of DNA testing and CT scans on Tut's 3,300-year-old mummy and 15 others are helping end many of the myths surrounding the boy king. While a comparatively minor ruler, he has captivated the public since the 1922 discovery of his tomb, which was filled with a stunning array of jewels and artifacts, including a golden funeral mask. 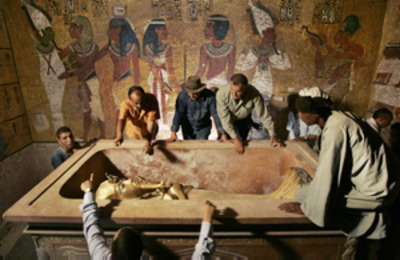 In this Sunday, Nov. 4, 2007 file photo, Egypt's antiquities chief Dr. Zahi Hawass, center, supervises the removal of King Tut from his stone sarcophagus in his underground tomb in the famed Valley of the Kings in Luxor, Egypt. (THE ASSOCIATED PRESS/Ben Curtis, Pool, File)
The study, which will be published Wednesday in the Journal of the American Medical Association, provides the firmest family tree yet for Tut. The tests pointed to Pharaoh Akhenaten, who tried to revolutionize ancient Egyptian religion to worship one god, as Tut's father. His mother was one of Akhenaten's sisters, it said.

Tut, who became pharaoh at age 10 in 1333 B.C., ruled for just nine years at a pivotal time in Egypt's history. Speculation has long swirled over his death at 19. A hole in his skull fueled speculation he was murdered, until a 2005 CT scan ruled that out, finding the hole was likely from the mummification process. The scan also uncovered the broken leg.

The newest tests paint a picture of a pharaoh whose immune system was likely weakened by congenital diseases. His death came from complications from the broken leg - along with a new discovery: severe malaria.

The team said it found DNA of the malaria parasite in several of the mummies, some of the oldest ever isolated.

"A sudden leg fracture possibly introduced by a fall might have resulted in a life threatening condition when a malaria infection occurred," the JAMA article said.

"Tutankhamun had multiple disorders... He might be envisioned as a young but frail king who needed canes to walk," it said.

The revelations are in stark contrast to the popular image of a graceful boy-king as portrayed by the dazzling funerary artifacts in his tomb that later introduced much of the world to the glory of ancient Egypt. 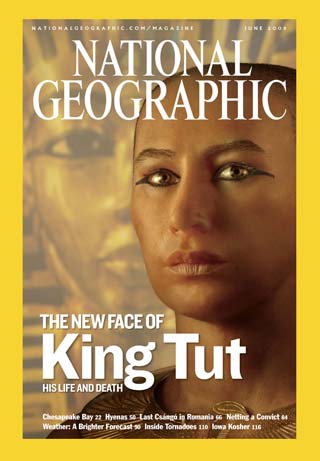 This cover of the June 2005 National Geographic magazine features the French rendering of Tutankhamun, the only one of three executed in 2005 that was given a skin color. The bust features what its creators considered a "mid-range" skin tone for modern-day Egyptians.
They also highlighted the role genetics play in some diseases. The members of the 18th dynasty were closely inbred and the DNA studies found several genetic disorders in the mummies tested such as scoliosis, curvature of the spine, and club feet.

Dr. Howard Markel, a medical historian at the University of Michigan, said some of King Tut's ailments including his bone disease likely were the result of his parents' incestuous marriage. Children born to parents who are so closely related to each other would be prone to genetic problems, he said.

Like his father, Tutankhamun had a cleft palate. Like his grandfather, he had a club foot and suffered from Kohler's disease which inhibits the supply of blood to the bones of the foot.

In Tut's case it was slowly destroying the bones in his left foot - an often painful condition, the study said. It noted that 130 walking sticks and canes were discovered in Tut's tomb, some of them appeared to have been used.

Egypt's top archaeologist, Zahi Hawass, who co-authored the study, noted that more than 80 years after Tutankhamun's discovery, technology was revealing secrets about the pharaoh.

The study is part of a wider program to test the DNA of hundreds of mummies to determine their identities and their family relations. To conduct the tests, Egypt built two DNA labs to follow international protocols for genetic testing.

Hawass, who had long opposed DNA testing on Egypt's mummies because it would have been performed outside the country, acknowledged his original skepticism. "I never thought that we would really reach a great important discovery," he said in an interview with The Associated Press.

The new study answered long-standing questions about Tutankhamun's family, tracing his grandfather to Pharaoh Amenhotep III. While some archaeologists have speculated that Tut's father was a little-known figure, Smenkhkare, it now appears that it was Akhenaten, who attempted to change millennia of religious tradition by forcing the country to worship the sun god Aten, instead of a multiplicity of deities.

DNA tests pinpointed the mummy of Tut's mother - and confirmed she was a sister of his father - but the mummy has not yet been firmly identified. Brother-sister marriages were common among Egypt's pharaohs. 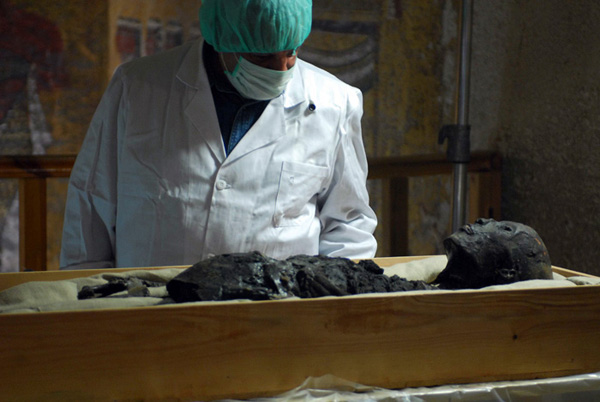 Dr. Hawass examines the mummy of Tutankhamun in his tomb. (Photo: SCA)
"There is a lot fuzziness about the succession and that's why knowing Tutankhamun was the son or direct blood descendant would make a difference," said Salima Ikram, an Egyptologist at the American University in Cairo and an expert on mummies.

The tests also disproved speculation that Tutankhamun and members of his family suffered from rare disorders that gave them feminine attributes and misshapen bones, including Marfan syndrome, a connective tissue disorder that can result in elongated limbs.

The theories arose from the artistic style and statues of the period, which showed the royal men with prominent breasts, elongated heads and flared hips.

"It is unlikely that either Tutankhamun or Akhenaten actually displayed a significantly bizarre or feminine physique," the article said.

Hawass' first high profile discovery involving DNA tests, the identification of the mummy of Queen Hatshepsut, came under criticism because it didn't follow accepted scientific protocols and was not published in a peer-reviewed scientific journal.

The tests were also not confirmed by a second, independent DNA lab.

This time the work by the Supreme Council of Antiquities DNA lab was replicated by a second DNA lab set up at Cairo University and the results were then published in the American medical journal.

Angelique Corthals, an assistant professor of forensic science at the John Jay College of Criminal Justice in New York helped set up the first Egyptian lab and said the work is being conducted according to international standards.

Hawass predicted that many more discoveries were in the works for King Tutankhamun and the mummy project.

"It will never be revealed completely, still we need more research," he said. "We finished the first great part of the mystery and the second one is coming soon in one year."