Kissinger to Serve As Papal Adviser? 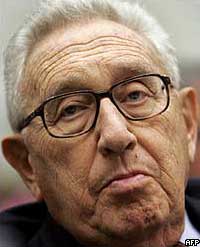 Pope Benedict XVI has invited Henry Kissinger, former adviser to Richard Nixon, to be a political consultant and he accepted.

Over the course of his long and controversial career, former U.S. Secretary of State Henry Kissinger has had many titles. Now he reportedly has one more — adviser to the Pope.

According to the Italian newspaper La Stampa, Pope Benedict XVI has invited the 83-year-old former adviser to Richard Nixon to be a political consultant, and Kissinger has accepted.

Quoting an “authoritative” diplomatic source at the Holy See, the paper reported Nov. 4 that the Nobel laureate was asked at a recent private audience with the Holy Father to form part of a papal “advisory board” on foreign and political affairs.

As the Register went to press, Kissinger’s office was unable to confirm or deny the report. La Stampa stood by its story, although the Italian press is less rigorous in its authentication of stories as is the United States Press.

If true, there is speculation on which issues Kissinger would advise the Holy Father. Relations with Islam, Palestine and Israel, and Iraq — Kissinger has been critical of the conduct of the war but opposes a quick withdrawal — are likely to be high up on the agenda.

It has also been speculated that, in view of the Muslim hostility to Benedict’s recent Regensburg speech, Kissinger might provide advice on dealing with an increasingly fractious Islamic world.

Furthermore, like the Pope, Kissinger has analyzed the challenges of globalization and might provide advice in this area as well.

“The idea [of his appointment] sounds like a good one,” said veteran Vatican journalist Sandro Magister. “But so would it also be to consult other experts on geopolitics with different orientations.”

The recruitment of Kissinger would not be unprecedented. Experts from a variety of disciplines, including the realm of economics, politics and philosophy, are regularly invited to advise popes and Vatican officials on current affairs.

Pope John Paul II was close friends with Zbigniew Brzezinski, the Polish-born national security adviser to President Jimmy Carter, partly because both had a common Polish heritage (though this caused the Soviets to suspect the Vatican of “fixing” the election of Karol Wojtyla, which occurred during the Carter presidency).

Similarly to John Paul and Brzezinski, Benedict and Kissinger are close in age and were both born in Bavaria (a Jew, Kissinger and his family fled Nazi Germany before World War II).

In recent years, other figures invited to share their expertise with the Holy See have included Paul Wolfowitz, a former President Bush adviser and now president of the World Bank; Michel Camdessus, the former director of the International Monetary Fund; American economist Jeffrey Sachs and Hans Tietmeyer, former governor of Germany’s central bank.

The pontifical academies also regularly call on academic luminaries as consultants, such as Nobel laureates Gary Becker, the successor to Milton Friedman at the Chicago School of Economics, and Italian medical researcher Rita Levi-Montalcini.

In comments to the Register, Novak said that “many, maybe most” of these experts are not Catholic, but that the Pope “can call in certain experts he wants to talk to, or hear a paper from, with discussion in a small group.”

Novak said this is true of both Benedict XVI and John Paul II, whom he described as having “very curious and searching minds.”

Any appointment of Kissinger is likely to cause some unease, however. One Iranian radio station is already reporting the news as a “papal-Jewish conspiracy,” while others object to the Pope consulting with someone who has been widely identified with the realpolitik school of political analysis, an approach that places practical considerations before morality.

Yet like Pope John Paul II, Benedict XVI is winning recognition for his intellectual ability and his capacity to discuss international issues with a diverse spectrum of world figures, ranging from the Dalai Lama to the late atheist polemicist Oriana Fallaci and to Mustapha Cherif, an Algerian Muslim philosopher whom he met this month.

“Such an appointment would really show Benedict XVI to be contrary to his media image, as someone who’s willing to listen to other voices not in accordance with his views,” said one Holy See diplomat about the reported enlistment of Kissinger as a papal adviser. “It’s always helpful to hear different voices offering different views.”