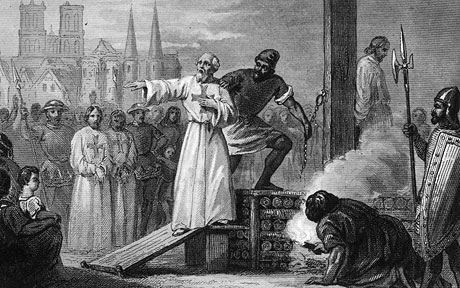 The heirs of the Knights Templar have launched a legal battle in Spain to force the Pope to restore the reputation of the disgraced order which was accused of heresy and dissolved seven centuries ago.

The Association of the Sovereign Order of the Temple of Christ, whose members claim to be descended from the legendary crusaders, have filed a lawsuit against Benedict XVI calling for him to recognise the seizure of assets worth 100 billion euros (£79 billion).

They claim that when the order was dissolved by his predecessor Pope Clement V in 1307, more than 9,000 properties as well as countless pastures, mills and other commercial ventures belonging to the knights were appropriated by the church.

But their motive is not to reclaim damages only to restore the "good name" of the Knights Templar.

"We are not trying to cause the economic collapse of the Roman Catholic Church, but to illustrate to the court the magnitude of the plot against our Order," said a statement issued by the self-proclaimed modern day knights.

The Templars was a powerful secretive group of warrior monks founded by French knight Hugues de Payens after the First Crusade of 1099 to protect pilgrims en route to Jerusalem.

They amassed enormous wealth and helped to finance wars waged by European monarchs, but spectacularly fell from grace after the Muslims reconquered the Holy Land in 1244 and rumours surfaced of their heretic practices.

The Knights were accused of denying Jesus, worshipping icons of the devil in secret initiation ceremonies, and practising sodomy.

Many Templars confessed to their crimes under torture and some, including the Grand Master Jacques de Molay, were burned at the stake.

The legal move by the Spanish group comes follows the unprecedented step by the Vatican towards the rehabilitation of the group when last October it released copies of parchments recording the trials of the Knights between 1307 and 1312.

The papers lay hidden for more than three centuries having been "misfiled" within papal archives until they were discovered by an academic in 2001.

The Chinon parchment revealed that, contrary to historic belief, Clement V had declared the Templars were not heretics but disbanded the order anyway to maintain peace with their accuser, King Philip IV of France.

Over the centuries, various groups have claimed to be descended from the Templars and legend abounds over hidden treasures, secret rituals, and their rumoured guardianship of the Holy Grail.

Most recently the knights have fascinated the modern generation after being featured in the film Indiana Jones and the Last Crusade and Dan Brown's novel The Da Vinci Code.