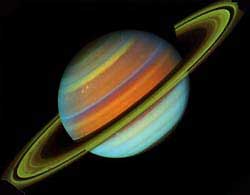 Scientists speculate the smudges that sometimes appear in Saturn's rings, then quickly disappear, could be caused by massive strokes of lightning or meteor strikes.

The idea was proposed by Geraint Jones of the Max Planck Institute for Solar System Research in Katlenburg-Lindau, Germany, according to Nature Magazine.

The report says "If the theory is right, these faint features are the signature of awesome events: lightning strokes ten thousand times more energetic than those on Earth, releasing beams of electrons that surge up from Saturn's surface to whack into the rings and blast out jets of electrically charged dust."

As for the smudges being the result of meteor strikes, Jones says: "It's implausible that several meteorites would strike the rings in the same place in close succession."

The reports are very speculative because no one has seen the types of storms on Saturn. But the idea of massive electron beams rising from the planet's surface is reminiscent of science fiction novels and would be truly amazing to see.