Man Has Camera Implanted In His Head 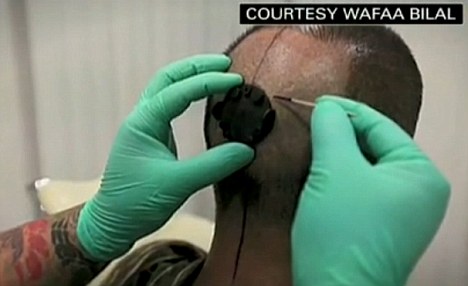 A New York University professor has had a camera surgically implanted in the back of his head as part of a new art exhibit.

Iraqi-born Wafaa Bilal, a photography professor at NYU’s Tisch School of the Arts, told CNN on Thursday that the purpose of "The 3rd I" project is to expose the unspoken conditions that humans face.

"A project like this is meant to establish a dialogue about surveillance,” said Bilal, who had the thumb-sized camera implanted at a piercing studio last month.

The device was mounted on a titanium plate inserted inside the back of his head, Bilal said.

A cable runs from the camera in Bilal’s head to a computer he carries with him in a customized shoulder bag, providing a real-time global positioning signal of his location.

The data can be viewed in real-time on the project’s website at www.3rdi.me.

The camera will take photographs each minute during Bilal’s everyday activities for one year, he said. The images will then be transmitted to the Arab Museum of Modern Art, in Doha, Qatar.

A statement by the museum said the exhibit, entitled "Told/Untold/Retold", would be unveiled in time for the museum’s December 30 opening.

"I wanted to lose that subjectivity [of knowingly taking photographs]," Bilal told CNN.

"At the same time I wanted to capture everyday mundane images."

The project has raised privacy concerns about the constant presence of cameras in Bilal’s classroom, which University authorities sought to dispel by requiring a cover over the lens while Bilal is teaching.

"We place a high value on his right to free expression in his creative work as an artist," CNN quoted university spokesman John Beckman as saying.

"But as a school of the arts, we also take seriously the privacy issues his project raises."

"The 3rd I" is not Bilal’s first involvement with controversial and unusual ventures. A 2007 project called "Domestic Tension" allowed virtual users to hurl paintballs at him in an exhibit that drove The Chicago Tribune to name Bilal artist of the year.

The project was "one of the sharpest works of political art to be seen in a long time,” the newspaper said.

Bilal has said he seeks to examine broader ideas and realities through his art.

"I see myself as a mirror reflecting some of the social conditions that we ignore.”