Many Scientists are Convinced that Man Can See the Future 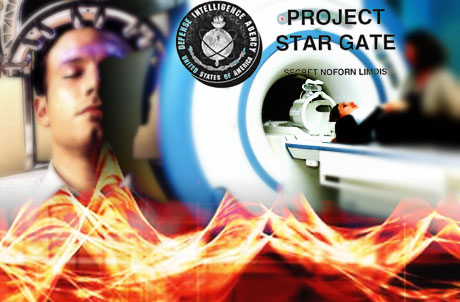 Professor Dick Bierman sits hunched over his computer in a darkened room. The gentle whirring of machinery can be heard faintly in the background.

He smiles and presses a grubby-looking red button.

In the next room, a patient slips slowly inside a hospital brain scanner. If it wasn't for the strange smiles and grimaces that flicker across the woman's face, you could be forgiven for thinking this was just a normal health check.

But this scanner is engaged in one of the most profound paranormal experiments of all time, one that may well prove whether or not it is possible to predict the future.

For the results - released exclusively to the Daily Mail - suggest that ordinary people really do have a sixth sense that can help them 'see' the future.

Such amazing studies - if verified - might help explain the predictive powers of mediums and a range of other psychic phenomena such Extra Sensory Perception, deja vu and clairvoyance. On a more mundane level, it may account for 'gut feelings' and instinct.

The man behind the experiments is certainly convinced. "We're satisfied that people can sense the future before it happens," says Professor Bierman, a psychologist at the University of Amsterdam.

"We'd now like to move on and see what kind of person is particularly good at it."

And Bierman is not alone: his findings mirror the data gathered by other scientists and paranormal researchers both here and abroad.

Professor Brian Josephson, a Nobel Prize-winning physicist from Cambridge University, says: "So far, the evidence seems compelling. What seems to be happening is that information is coming from the future.

"In fact, it's not clear in physics why you can't see the future. In physics, you certainly cannot completely rule out this effect."

Virtually all the great scientific formulae which explain how the world works allow information to flow backwards and forwards through time - they can work either way, regardless.

Shortly after 9/11, strange stories began circulating about the lucky few who had escaped the outrage.

It transpired that many of the survivors had changed their plans at the last minute after vague feelings of unease.

It was a subtle, gnawing feeling that 'something' was not right. Nobody vocalised it but shortly before the attacks, people started altering their plans out of an unspoken instinct.

One woman suffered crippling stomach pain while queuing for one of the ill-fated planes which flew into the World Trade Center.

She made her way to the lavatory only to recover spontaneously. She missed her flight but survived the day. Amid the collective outpouring of grief and horror it was easy to overlook such stories or write them off as coincidences.

But in fact, these kind of stories point to an interesting and deeper truth for those willing to look.

If, for example, fewer people decided to fly on aircraft that subsequently crashed, then that would suggest a subconscious ability to divine the future. Well, strange as it seems, that's just what happens.

The aircraft which flew into the Twin Towers on 9/11 were unusually empty. All the hijacked planes were carrying only half the usual number of passengers. Perhaps one unusually empty plane could be explained away, but all four?

And it wasn't just on 9/11 that people subconsciously seemed to avoid disaster. The scientist Ed Cox found that trains 'destined' to crash carried far fewer people than they did normally.

Dr Jessica Utts, a statistician at the University of California, found exactly the same bizarre effect.

If it was possible to divine the future, you might expect those at the sharp end, such as pilots, to have the most finely tuned instincts of all. And again, that's just what you see.

When the Air France Concorde crashed in 2000, it wasn't long before the colleagues of those killed in the crash spoke about a sense of foreboding that had gripped the crew and flight engineers before the accident.

Speaking anonymously to the French newspaper Le Parisien, one spoke of a 'morbid expectation of an accident'.

"I had this sense that we were going to bump into the scenery," he said.

"The atmosphere on the Concorde team for the last few months, if one has the guts to admit it, had been one of morbid expectation of an accident. It was as if I was waiting for something to happen."

All of these stories suggest that we can pick up premonitions of events that are yet to be.

Although these premonitions are not in glorious Technicolor, they are often emotionally powerful enough for us to act upon them.

In technical parlance it is known as 'presentiment' because emotional feelings are being received from the future, not hard facts or information.

The military has long been fascinated by such phenomena. For many years the US military (and latterly the CIA) funded a secretive programme known as Stargate, which set out to investigate premonitions and the ability of mediums to predict the future.

Dr Dean Radin worked on the Stargate programme and became fascinated by the ability of 'lucky' soldiers to forecast the future.

These are the ones who survived battles against seemingly impossible odds. Radin became convinced that thoughts and feelings - and occasionally-actual glimpses of the future - could flow backwards in time to guide soldiers.

It helped them make life-saving decisions, often on the basis of a hunch.

He devised an experiment to test these ideas. He hooked up volunteers to a modified lie detector, which measured an electrical current across the surface of the skin.

This current changes when a person reacts to an event such as seeing an extremely violent picture or video. It's the electrical equivalent of a wince.

And he soon discovered that people began reacting to the pictures before they saw them. It was unmistakable. They began to 'wince' a few seconds before they actually saw the image.

And it happened time and time again, way beyond what chance alone would allow.

So impressive were Radin's results that Dr Kary Mullis, a Nobel Prizewinning chemist, took an interest. He was hooked up to Radin's machine and shown the emotionally charged images.

"It's spooky," he says "I could see about three seconds into the future. You shouldn't be able to do that."

Other researchers from around the world, from Edinburgh University to Cornell in the US, rushed to duplicate Radin's experiment and improve on it. And they got similar results.

It was soon discovered that gamblers began reacting subconsciously shortly before they won or lost. The same effect was seen in those terrified of animals, moments before they were shown the creatures.

The odds against all of these trials being wrong are literally millions to one against.

Professor Dick Bierman decided to take this work even further. He is a psychologist who has become convinced that time as we understand it is an illusion. He could see no reason why people could not see into the future just as easily as we dip into memories of our past.

He's in good company. Einstein described the distinction between the past, present and future as 'a stubbornly persistent illusion'.

To prove Einstein's point, Bierman looked inside the brains of volunteers using a hospital MRI scanner while he repeated Dr Radin's experiments.

These scanners show which parts of the brain are active when we do certain tasks or experience specific emotions.

Although extremely complex, and with each analysis taking weeks of computing time, he has run the experiments twice involving more than 20 volunteers.

And the results suggest quite clearly that seemingly ordinary people are capable of sensing the future on a fairly consistent basis. Bierman emphasises that people are receiving feelings from the future rather than specific 'visions'.

It's clear, though, that if ordinary people can receive feelings from the future then perhaps the especially gifted may receive visions of things yet to be.

It's also clear that many paranormal phenomena such as ESP and clairvoyance could have their roots in presentiment.

After all, if you can see a few seconds into the future, why not a few days or even years? And surely if you could look through time, why not across great distances?It's a concept that ties the mind in knots, unless you're a physicist.

"I believe that we can 'sense' the future," says the Nobel Prizewinning physicist Brian Josephson.

"We just haven't yet established the mechanism allowing it to happen.

"People have had so called 'paranormal' or 'transcendental' experiences along these lines. Bierman's work is another piece of the jigsaw. The fact that we don't understand something does not mean that it doesn't happen.'

If we are all regularly sensing the future or occasionally receiving glimpses of it, as some mediums claim to do, then doesn't that mean we can change the future and render the 'prediction' obsolete?

Or perhaps we were meant to receive the premonition and act upon it? Such paradoxes could go on for ever, providing a rich seam of material for films such as Minority Report - based on a short story of the same name - in which a special police department is able to foresee and prevent crimes before they have even taken place.

Could such science fiction have a grain of truth in it after all? The emerging view, Bierman explains, is that 'the future has implications for the past'.

"This phenomena allows you to make a decision on the basis of what will happen in the future. Does that restrain our free will? That's up to the philosophers. I'm far too shallow a person to worry about that."

The problem with presentiment is that it appears so nebulous that you can't rely on it to make reliable decisions. That may be the case, but there are plenty of instances where people wished they had listened to their premonitions or feelings of presentiment.

One of the saddest involves the Aberfan disaster. This occurred in 1966 when a coal tip collapsed and swept through a Welsh school killing 144 people, including 116 children. It turned out that 24 people had received premonitions of the tragedy.

One involved a little girl who was killed. She told her mother shortly before she was taken to school: "I dreamed I went to school and there was no school there. Something black had come down all over it."

So should we listen to our instincts, hunches and dreams? Some experts believe we may already be using them in our everyday lives to a surprising degree.

Dr Jessica Utts at the University of California, who has worked for the US military and CIA as an independent auditor of its paranormal research, believes we are constantly sampling the future and using the knowledge to help us make better decisions.

"I think we're doing it all the time," she says. "We've looked at the data and it does seem to happen."

So perhaps the Queen in Through The Looking Glass was right: "It's a poor sort of memory that only works backwards."