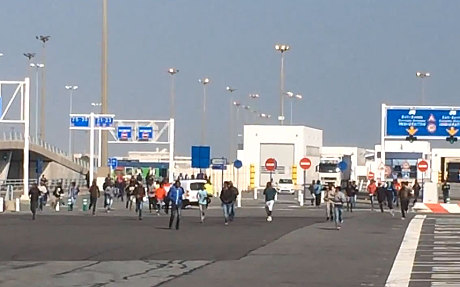 Migrants storm the dock in Calais

The mayor of Calais threatens to close the port after ferries raised their ramps to stop the men boarding ferries to Britain.

The mayor of Calais has threatened to shut the port after 100 migrants tried to storm their way onto a ferry to Britain.

Police and port security were overwhelmed as the group forced open a gate and climbed over security fences before running towards the docks.

Ramps to the ferries had to be raised to prevent the men boarding the ships as a larger group of 150 migrants gathered outside the dock entrance.

Video showed the group being chased through the port by police as lorry drivers looked on.

Ferry companies declared the port invasion a "huge intrusion" and ferry company P&O, who had a ferry at the quayside at the time, confirmed it closed all its ship ’s doors.

Lorry driver Mark Salt, who shot the video, said: "I checked into P&O for the crossing heard a lot of other truckers banging their horns by the border agency check point.

"Then about 80-100 immigrants came into view heading straight for the ramps where a ship was about to dock. P&O staff, port workers and border agency security attempted to coral these guys away from the ramps."

The ship ’s crew reportedly turned their fire hoses on the men to prevent them boarding the ship. The ferry was delayed for about 45 minutes while it was searched by police and the crew.


British truckers who use the port say they are subject to regular attacks from migrants desperate to make their way to Britain.

"It would be illegal," Ms Bouchart admitted, "but today I want to make a strong gesture towards the British.

"The aim is to shut all the squats in Calais to control the influx so there are fewer migrants arriving in the town."

Ms Bouchart has criticised the British government for demanding security be increased at the port in Calais, but not offering a sufficient contribution towards the 10 million euro (£8m) annual cost.

Around 1,200 migrants live in makeshift camps in the town and make regular attempts to cross the channel by hiding in lorries bound for Britain.

Police attempts to clear the camps have led to violent confrontations with the men who mostly come from East African countries such as Somalia and Eritrea.

Ms Bouchart and Mr Cazeneuve have discussed opening a day centre for immigrants in the town and a night shelter for the women and children.

A Red Cross centre in nearby Sangatte was opened for migrants in 1999 but was closed in 2002 after it became overcrowded.

Article from: news.sky.com
Hundreds of illegals demand the French send them to Great Britain

Mohammed is most popular name in Oslo
Tune in:

Christopher Bollyn - Hour 1 - Solving 9-11, The Deception that Changed the World