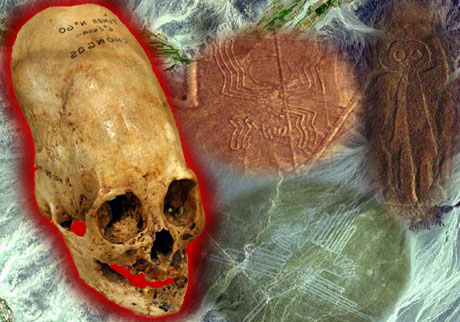 A team from the Universitat Autònoma de Barcelona and the University of Almería has completed its second part of the "Proyecto La Puntilla", an archaeological expedition to the Peruvian province of Nazca, where last year it discovered a new type of construction. The latest findings show that a new political power based on the exercise of violence emerged on the south coast of Peru two thousand years ago. There was a State in which an aristocracy, based in Cahuachi, exercised its dominion on other, poorer communities in the Nazca Valley. The team has also observed practices such as cranial deformation.

The excavations at the necropolis of El Trigal have uncovered new information on the repercussions of the emergence of the State in southern Peru. The archaeologists have found that El Trigal graves are very simple, in contrast with the extravagant tombs of the aristocracy around Nazca.

The situation shows the poverty that existed among the community in El Tribal. The dominant group in the State of Cahuachi imposed the transfer of wealth through taxes and other means. This explains the poverty of those living in the area of La Puntilla.

A settlement was established in El Trigal about 3000 years ago. Several centuries later, this had become an economically strong community with a vast network of relations with other territories. This hypothesis is backed up by the presence of valuable Spondylus shells (probably from the distant coasts of what today we know as Ecuador), obsidian (from the mountains), and craft tools, such as the boat decorated with the style known as Ocucaje 8 (possibly manual workers in the north).

However, the necropolis excavated in El Trigal, dated as being from the first century AD, represents a later period of decline and pauperisation in the community, coinciding with the emergence of Cahuachi.

This data confirms that 1900 years ago a State existed in the Nazca Valley based in the monumental settlements of Cahuachi, where pyramids were built. Those governing Cahuachi belonged to one of the groups who shared control over the south coast of Peru, such as the aristocratic group described in the Paracas necropolis (near Pisco), in the same area.

The dominant class in Cahuachi controlled the communities in the Nazca Valley using violence, forcing the communities to economically sustain the group in power. Between those communities were those that occupied the area known as La Puntilla, to the east of Nazca, where the research team has been excavating for the past two years.

One of the key findings at the necropolis was that some of the bodies found in the tombs have undergone certain manipulations. One such manipulation was cranial deformation in order to obtain an "elongated skull", and this has been observed in one of the corpses.

This practice took place during childhood by using wooden objects to put pressure on the skull. "Elongated skulls" are characteristic of the aristocracy buried in the tombs in Paracas, and a number of studies suggest that this treatment was a way of distinguishing dominant groups. This is why it is so significant that this characteristic has been found in an individual buried at the necropolis of a poor community in the Nazca Valley.

This discovery opens up a series of other questions: Is this the member of a family belonging to the dominant group? Or is the practice unrelated to a person's affiliation with a group? Was it a way of identifying individuals who took part in specific activities (for example, shamanism)?

In another tomb, another interesting case has been found. Alongside the corpse of a woman, they have found the legs and feet of another individual. We know that decapitation and dismemberment were frequent among the first states of the region, so we cannot discard the possibility that this was an intentional act.

The fieldwork in this second part of the "Proyecto La Puntilla" ended in December, and the material and human remains uncovered are now being studied. The research will be amplified through a programme to analyse the DNA in order to find evidence on the affiliation of those individuals buried at the necropolis.

The "Proyecto La Puntilla" is funded by the General Directorate for Fine Arts and Cultural Assets of the Spanish Ministry of Culture and by the Catalan Department of Education and Universities. The project is also recognised by the National Institute for Culture of Peru. The research team consists of archaeologists and students from Spain, Peru, Chile, Argentina, France and Italy.