“None of Us Had to Flee:” Syrian Invader

Dec 14, 2015 Source: newobserveronline.com
No one in Syria had to flee the war and they all have come to Europe just to seek money and take up jobs supposedly offered to them by Angela Merkel, an “asylum seeker” Syrian in Germany has admitted to the Huffington Post.

The confession is contained in an article prepared by a well-known Iranian-born writer living in Germany, Ramin Peymani, and published in that newspaper’s German edition. 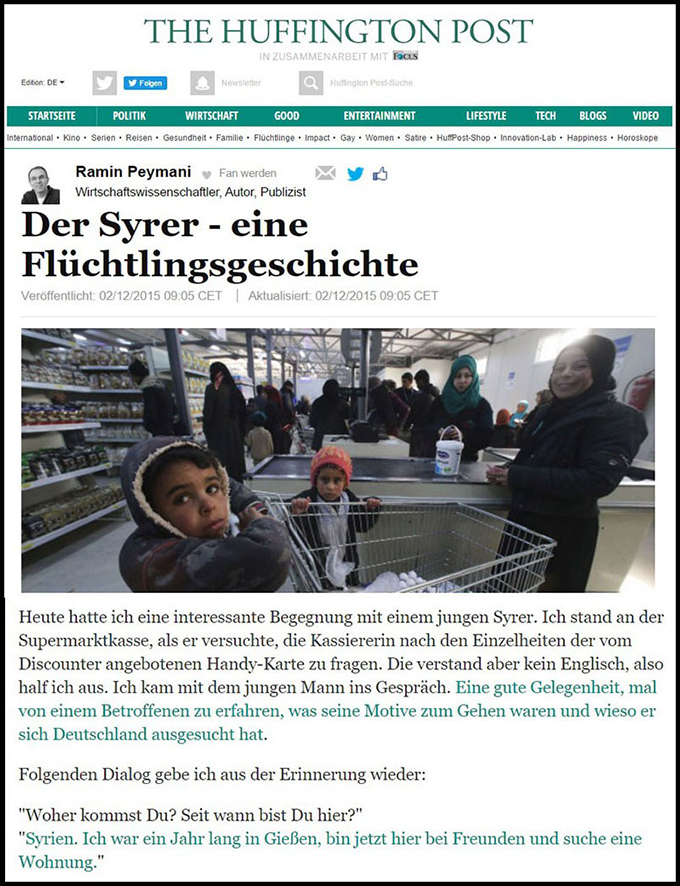 The article, titled Der Syrer—eine Flüchtlingsgeschichte (“The Syrians—a Refugee Story,” Dec. 2, 2015), starts off by Peymani explaining that he met up with the Syrian refugee by chance in the checkout line at a local grocery store in Germany.

Being Iranian, Peymani could speak fluently with the “refugee,” who freely admitted that he, and all the others claiming to be refugees, were not fleeing war, but had merely come in search of jobs and money.

The Syrian told Peymani that his mother lived in America, that that his sister was still in Syria.

“Did you escape with your mother? Why your sister has not come?” Peymani asked.

“No, I did not flee. None of us had to flee,” the Syrian freely admitted.

“The Assad regime is cruel and unjust, but you can live in Syria, if you just don’t mess with it.”

Peymani then asked if the Syrian had then fled from the Islamic State terrorists. The Syrian’s answer in this regard was revealing as well:

“I come from Damascus, like most of us [refugees] do that I’ve met in the camp. There is no IS [in Damascus]; it is in other regions, for example, towards Iraq.”

Peymani then asked him the logical next question: “Are you saying that most Syrians do not flee from war and persecution?”

The Syrian answered: “Yes. My friends and I went because we didn’t want to go to the army. And because it is easier to get a good job and earn money in Europe.”

Peymani then wanted to know why so many Syrians had come so suddenly. “Why now are so many coming? Is it because the Assad regime has become worse?”

The Syrian replied: “No. He [Assad] has been in power many years already. The regime is cruel and can kill opponents, but my family and I have not been touched, and none of my friends either.”

So why had they all now come to Europe, Peymani asked, to which the Syrian replied:

“In the summer we saw on the Internet that Germany wanted people to live there. We were invited to come here. And it was said that the state would take care of us and we would be given jobs. But I cannot find one…”

Peymani also asked him what route he had followed to Germany.

“I lived in Turkey for some time after my mother had emigrated to the United States to be with relatives. But I could not get a visa for the USA, even though my mother has a green card.”

Peymani asked him if he had “fled” to Turkey “because of the war in Syria?”

Laughing, the Syrian replied: “No (laughs). My friends and I are here because we thought we’d find work. We did not like Turkey.”

He was then asked if his “story is typical of the people who leave Syria?”

The Syrian replied: “I think most go for the same reason as I did. All men of my age, who want to just live better elsewhere.”