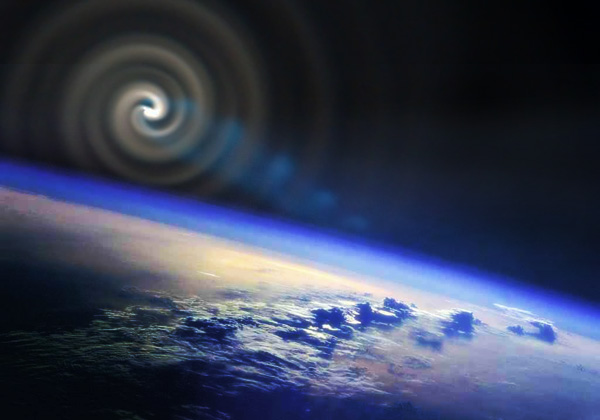 Russian scientists are reporting to Prime Minister Putin today that the high-energy beam fired into the upper heavens from the United States High Frequency Active Auroral Research Program (HAARP) radar facility in Ramfjordmoen, Norway this past month has resulted in a “catastrophic puncturing” of our Plant’s thermosphere thus allowing into the troposphere an “unimpeded thermal inversion” of the exosphere, which is the outermost layer of Earth’s atmosphere.

To the West’s firing of this ‘quantum’ high-energy beam we had previously reported on in our December 10, 2009 report titled “Attack On Gods ‘Heaven’ Lights Up Norwegian Sky”.

To how catastrophic for our Planet this massive thermal inversion has been Anthony Nunan, an assistant general manager for risk management at Mitsubishi Corporation in Tokyo, is reporting today that the entire Northern Hemisphere is in winter chaos, with the greatest danger from this unprecedented Global event being the destruction of billions of dollars worth of crops in a World already nearing the end of its ability to feed its self.

So powerful has this thermal inversion become that reports from the United States are stating that their critical crops of strawberries, oranges, and other fruits and vegetables grown in their Southern States, are being destroyed by record cold temperatures. The US is further reporting record amounts of snowfall in what they are now warning may be their worst winter in 25 years.

Reports from the United Kingdom today are, likewise, showing a Nation in chaos as brutal cold temperatures continue to batter the British people suffering under the worst snow blizzards to hit them in almost 50 years. So dire has it become in the UK that their National Grid yesterday issued only its second warning in its entire history stating that their Nation’s gas supply was running out due to this unprecedented event.

Not just to the UK, but also to the entire European Union has this thermal inversion been affecting as reports from that region show continued chaos is occurring due to plunging temperatures and snows. In the UK, also, reports are showing that the military has been called out to rescue over 1,000 stranded vehicles.

Though the Motherland, and its people, are some of the best equipped in the World to handle such severe winter conditions, the Russian island of Sakhalin was inundated this past week by a rare Snow Cyclone setting off no less than avalanches.

But to the worst affected region of the Northern Hemisphere no one has been hit harder than China, where in what is being described as a “soul-destroying snowstorm” this Asian Nation has been plunged into such havoc the entire country has been brought to a standstill. China further reports that the massive snowstorms hitting them are their worst in 60 years and necessitating their military forces to save over 1,400 people trapped when their train became covered in snow. So overwhelmed by this unprecedented event has China become that they have ordered all of their citizens to help with snow removal too.

South Korea has not been spared either as reports from that Nation are reporting their worst snow storms in their modern history of recording these events.

Reports from Japan are also reporting record snowfall in their Northern Regions, where according to one unnamed Kushiro resident, “Snow falls hard here in Kushiro, but this is the most I have ever seen. The snow’s piling up and we’re running out of places to dump it.”

Canada, another Nation used to extreme winter events, reports that the storm that had hit their maritime provinces this past week was so powerful buildings were knocked off of their foundations in what one resident, Tom Jardine, described as being “worse than a hurricane”.

To the long-term consequences of this thermal inversion caused by the West, these reports further warn that by the puncturing of our atmosphere by the HHARP radars our Planet has, also, been “needlessly exposed” to the growing threat posed to us by the giant mysterious object currently approaching us (named by NASA as G1.9) which we had previously reported on in our January 3rd report titled “Russia Prepares For Asteroid Strike As New Comet Nears Sun”, and which has been blamed for the rapid shifting of our Earth’s North Pole that was first documented in 2005.

But to the most critical aspect of these events it surely lies with the Western World’s continued arrogance in regards to experimenting on both our Planets natural species and human beings, and though who may think that they are ‘gods’, are continuing to give evidence that they are acting more like devils.

DISCLAIMER: Pakistan Daily News does not necessarily agree witht he views set forth by the Author of this post.