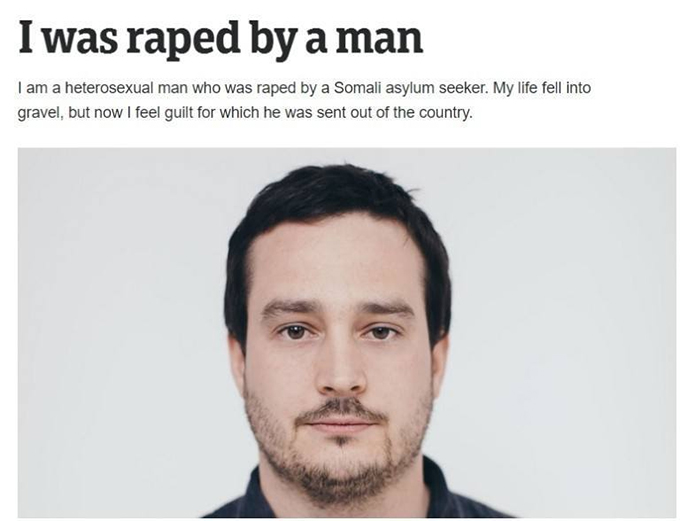 Leftist Norway politician Karsten Nordal Hauken was brutally raped by a Somali and felt so incredibly guilty in the aftermath he subsequently questioned whether authorities should even deport the man.

Hauken has finally come out to tell the public his story of his rape and forgiveness, Norway’s public broadcasting channel NRK reports.

Immediately after the rape first occurred, Hauken was taken to the hospital in Oslo where nurses collected samples for DNA evidence. About six months after the rape, police completed their investigation. They secured the DNA and fingerprint evidence necessary to move the case forward.

In court, the Somali claimed the interaction was consensual, but Norwegian authorities begged to differ. The Somali went to prison for four and a half years.

The story doesn’t end there. Shortly before the sentence was over, Hauken learned the man was about to be deported from Norway and sent back to Somalia.

“I got a strong feeling of guilt and responsibility,” Hauken wrote. “I was the reason he wouldn’t be in Norway, and instead be sent to an unknown future in Somalia. He had already done his time in prison. Would he get punished again, and this time much harder?”

Hauken fell into a deep depression. He started drinking heavily and lost years doing little else but smoking marijuana to dodge feelings of self-loathing.

He’s since apparently turned his life around and has come to some important realizations, which may strike other observers as completely bizarre.

As Hauken noted in the interview, it’s important not to stay silent about personal struggles and mental illness. Rape happens, and not just to women. But perhaps the most notable lesson Hauken says he learned is that “rapists are from a world so different from ours.”

“In his culture, sexual abuse is about power, not lust,” Hauken said. “And it’s not considered a gay action to be the one who engages in power and violence.”

What this all means, according to Hauken, is that refugees need our help more than ever.