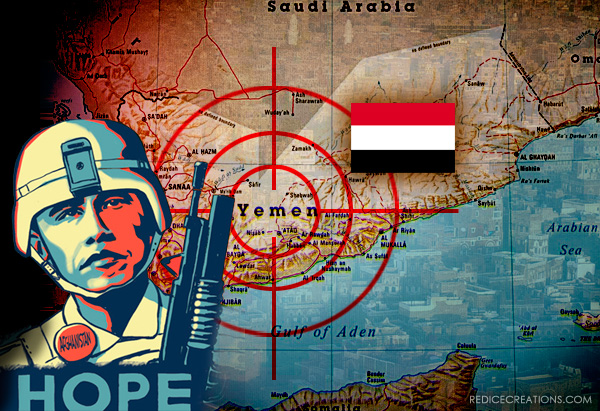 Five days after the unsuccessful attempt by a Nigerian student to set off a bomb aboard a Detroit-bound passenger jet, US military and intelligence officials are said to be preparing expanded military action against targets in Yemen, the Arab country where the student allegedly received terrorist training and was equipped with an explosive device.

A series of US media reports suggest that new US-backed military attacks inside Yemen are imminent. Citing “two senior US officials,” CNN reported: “The US and Yemen are now looking at fresh targets for a potential retaliation strike.”

The network said the officials “both stressed the effort is aimed at being ready with options for the White House if President Obama orders a retaliatory strike.” CNN continued: “The effort is to see whether targets can be specifically linked to the airliner incident and its planning. US special operations forces and intelligence agencies, and their Yemeni counterparts, are working to identify potential Al Qaeda targets in Yemen, one of the officials said.”

The network said the Obama administration and the long-time Yemeni dictator, Field Marshal Ali Abdullah Saleh, had reached an agreement to allow the US to fly cruise missiles, fighter jets and armed drones, used for remote-control assassinations, in Yemeni airspace. Talks were still ongoing on whether Saleh will give permission for the entry of US helicopter-borne Special Forces.

The report comes after a series of statements by top administration officials, including Obama himself, pledging that “all elements of US power” will be used in response to the failed attack on Northwest Flight 253. The White House has been under heavy fire from its Republican opponents over the evident security failure, and a military action would serve to divert public attention from the ongoing revelations of how the CIA and other US agencies ignored warnings about the impending attack.

Yemen’s foreign minister, Abu Bakr al Qirbi, told the BBC that his country was seeking stepped up military aid, presumably as part of a package deal—in effect, a bribe for allowing the country’s territory to be turned into a battlefield for US commandos.

The Wall Street Journal reported that the Obama administration was discussing nearly tripling its military and counterterrorism aid to Yemen in the coming year. US aid jumped from $4.6 million in 2006 to $67 million this year, and would rise to as much as $190 million in 2010, according to “a senior military official.”

Reuters, citing unnamed “defense and counterterrorism officials,” reported that “the Obama administration was exploring ways to accelerate and expand US assistance to Yemeni forces to root out the Al Qaeda leadership in the country, while keeping the role of the US military and intelligence agencies as behind the scenes as possible.”

The news agency reported a clash between Yemeni security forces and Al Qaeda fighters in the western Hudaydah province, around the town of Deir Jaber.

The Los Angeles Times cited a Yemeni terrorism expert as the source of an estimate that Al Qaeda has “as many as 2,000 militants and sympathizers exploiting the country’s economic and political chaos to create a base for jihad at the edge of the Persian Gulf.” This is ten times more than other media estimates of the number of such militants in Yemen, and 20 times the number of Al Qaeda forces said by US officials to be in Afghanistan now.

The Times report is part of an effort by the US media to portray Yemen as a lawless hotbed of terrorism and a major threat to the United States, in order to justify in advance an American attack, or even a full-scale invasion.

It was followed by an even more apocalyptic comment by “terrorism expert” Steven Emerson, interviewed Wednesday morning on CBS’ “Early Show.” He said that while the Pakistan-Afghanistan border was still “number one” for terrorist activity, the area surrounding the Gulf of Aden, including Yemen and Somalia, was “fast coming up the ladder.”
“Yemen possibly could surpass Pakistan in the next year, given the terrorist trajectory for providing a haven for Al Qaeda,” he claimed. In light of the fact that the Obama administration is mobilizing 100,000 American troops as well as hundreds of warplanes and drones for combat along the Afghanistan-Pakistan border, such a comparison is extremely ominous.

Emerson took particular note of “literally scores of American Muslim students studying and being trained in Yemen to this day…. There’s a pool of potential terrorists out there that have Western passports that can board planes without visas.”
The clear goal of such far-fetched claims is to create a pogrom atmosphere directed against all young American Muslims, particularly those of Arab or East African origin.

These comments were made one day after press reports of an alleged abortive attempt by a Somali man equipped with explosive powder and a syringe to board a passenger jet in Mogadishu, the capital city. This is the same modus operandi as that of the Nigerian man, Umar Farouk Abdulmutallab, aboard Northwest Flight 253 on Christmas Day. The Somali was arrested by African peacekeeping troops on November 13 and never succeeded in getting on the plane.

The Washington Post, the leading newspaper in the US capital, published an editorial Wednesday noting that in the wake of the Christmas Day bombing attempt, allegedly originating in Yemen, “some are asking whether the United States should launch a military offensive in that impoverished Arabian nation.” The editorial continued: “The answer, of course, is that it already has.”

Citing a series of raids conducted by Yemeni and US forces, the Post praised the Obama administration for having “significantly stepped up US counterterrorism operations in Yemen,” including the dispatch of CIA and Special Forces personnel. But it warned: “Still, Yemen’s steady slide toward failed-state status in recent years means that it, like nearby Somalia, will probably demand concerted and multifaceted US engagement for years to come. More than Special Forces and missile strikes are needed.”

While declaring that “US ground troops are not needed, for now, in Yemen or Somalia,” the newspaper suggested that such forces may well be required in the future. It declared, “in those countries, as in Afghanistan, a strategy limited to counterterrorism will not eliminate the threat.”

Once again, as in the case of Afghanistan and Iraq, American imperialism is preparing a military bloodbath in an impoverished country, using a terrorist attack—in this case a failed attempt—as the pretext. According to reports by the UN and Yemeni government statistics, some 35 percent of the adult population of the country is unemployed. Yemen is the poorest of the Arab countries, has exhausted its very limited oil export capacity, and now faces severe water shortages.

But Yemen possesses, like Afghanistan and Iraq, a highly strategic geographic location, adjacent to Saudi Arabia, the world’s largest oil exporter, and the Red Sea, controlling access to the Suez Canal. Yemen also borders on the Gulf of Aden, the shipping route for much of the oil leaving the Persian Gulf.

US military forces are already deployed across the strait of Bab el Mandeb in Djibouti, the former French Somaliland, which remains a virtual French colony. Djibouti hosts thousands of French and US troops who could quickly move into Yemen if so ordered by Paris and Washington. A large US and NATO war fleet patrols shipping lanes through the Gulf of Aden and south along the Indian Ocean coast of Somalia.