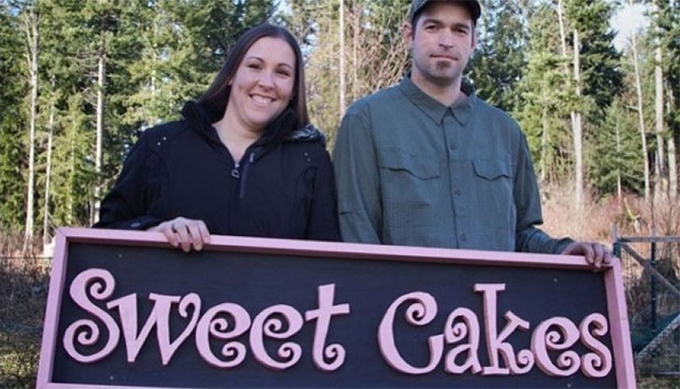 Shut up! Don’t say another word.

That’s what the Oregon Bureau of Labor and Industry (BOLI) is telling the owners of Sweet Cakes By Melissa, a bakery owned by Christians who refused to bake a cake for a lesbian wedding.

On Friday the state ordered owners Aaron and Melissa Klein to pay $135,000 in damages to a lesbian couple they turned away in 2013.

The state also slapped a gag order on the evangelical Christian bakers – banning them from speaking publicly about their refusal to participate in or bake wedding cakes for same-sex unions.

“This effectively strips us of all our First Amendment rights,” Mrs. Klein wrote on Facebook. “According to the state of Oregon, we neither have freedom of religion or freedom of speech.”

The Kleins were ordered to “cease and desist from publishing, circulating, issuing or displaying, or causing to be published, circulated, issued or displayed, any communication, notice, advertisement or sign of any kind to the effect that any of the accommodations, advantages, facilities, services or privileges of a place of public accommodation will be refused, withheld from or denied to, or that any discrimination will be made against, any person on account of sexual orientation.”

The order was signed by Brad Avakian, the commissioner of the BOLI and a vocal supporter of the LGBTQIA community.

“Within Oregon’s public accommodations law is the basic principle of human decency that every person, regardless of their sexual orientation, has the freedom to fully participate in society,” the ruling states. “The ability to enter public places, to shop and dine, to move about unfettered by bigotry.”

On a side note here – I predicted that once gay marriage was legalized, LGBTQIA supporters would attempt to silence all dissent.

Avakian has publicly stated his intentions to target Christian business owners who do not comply with his way of thinking. Here’s what he told The Oregonian about Sweet Cakes By Melissa in 2013:

“The goal is never to shut down a business. The goal is to rehabilitate.”

Here we have a government employee who wants to “rehabilitate” Christian business owners like the Kleins. How exactly does Avakian plan on purging their religious beliefs? Is the state of Oregon running a reeducation camp? Or maybe they prefer to use shock therapy.

I’m truly interested to know what sort of conversion therapy treatments Avakian uses. However, he won’t return my telephone calls.

The Kleins did not seem all that concerned about Avakian’s order to remain silent. The first thing they did after reading his edict was to call me.

“I don’t really care,” Mr. Klein told me. “This man has no power over me. He seems to think he can tell me to be quiet. That doesn’t sit well with me – and I refuse to comply.”

The Kleins tell me they have been ordered not to speak to any news organizations or speak publicly – an order they violated when they called me.

“They picked the wrong guy,” Mr. Klein said. “When my constitutional freedoms have been violated by the state, I’m going to speak out. That’s the way it is.”

Mrs. Klein told me she was shocked that the state of Oregon thinks they have the power to silence her voice.

“For us to not be able to speak about it – that’s our freedom of speech,” she said. “All Americans should be free to live and work by their faith and speak their mind.”

Since 2013 the Kleins and their five children have become targets of LGBTQIA activists and their supporters. They eventually had to shut down their retail store after they were hit with boycotts and protests.

Their children were subjected to death threats and the family had to install security at their rural home.

Mr. Klein had to take a job picking up garbage after LGBTQIA activists and their cronies threatened other wedding vendors who did business with Sweet Cakes By Melissa.

In spite of the LGBTQIA bullying, the Kleins remain steadfast in their faith and will refuse to bow down to the government.

“God is awesome,” Mrs. Klein told me. “He is taking care of us. I’m not sad about it at all. It is what it is. God opens doors and shuts doors.”

The family has launched a donation page to help defray the expenses of their fight with the state of Oregon.

Friends, it is open season on Catholics and Evangelical Christians – and I suspect we will hear more stories from Christian business owners just like the Kleins – targeted by LGBTQIA activists and their minions.

“The First Amendment ensures that religious organizations and persons are given proper protection as they seek to teach the principles that are so fulfilling and so central to their lives and faiths, and to their own deep aspirations to continue the family structure they have long revered,” he wrote.

Perhaps Justice Kennedy should tell that to Aaron and Melissa Klein. They tried to live out the central principles of their lives and faith – and were slapped with a $135,000 fine and a cease and desist order.