Prince Andrew should be questioned because he 'knows the truth' about billionaire U.S. paedophile 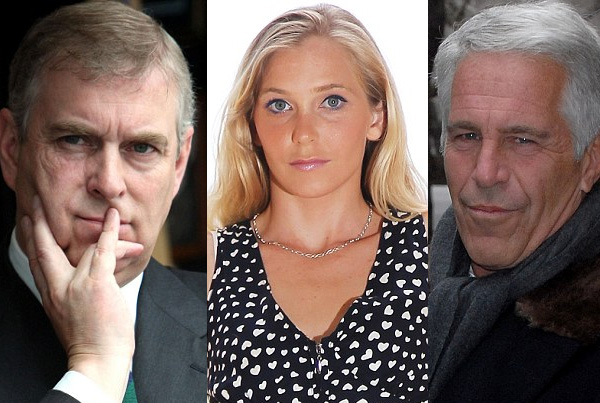 Virginia Roberts alleged that the Royal could give 'valuable' insight to the FBI investigation against Epstein, a convicted sex offender.

The Wall Street financier was jailed for 18 months in 2008 for soliciting a minor for prostitution.

Miss Roberts made the comments to lawyers in Florida and also said she is afraid to reveal too much information about Epstein's 'influential' friends because they scare her.

Miss Roberts was one of at least 17 women who settled lawsuits with Epstein in 2005 after telling a criminal inquiry that he had abused them as under-age girls.

Miss Roberts alleged that she was paid to massage Epstein and his 'adult male peers, including royalty' on flights around the world from the age of 15, and that she was sexually exploited during that time.

There is no suggestion whatsoever that Prince Andrew was involved in any wrongdoing.

Miss Roberts, 27, was interviewed last month by lawyers from a Florida law firm representing many of the women who have made allegations against Epstein, all of which he denies.

She was asked to examine a list of Epstein's friends and identify any who would have significant information about his sexual exploitation of young girls if required to testify under oath.

Prince Andrew's name was suggested by lawyer Jack Scarola and Miss Roberts replied: 'Yes, he would know a lot of the truth,' according to the Daily Telegraph.

Miss Roberts told the lawyer how she served Epstein and eight of his male friends sexually, but refused to name those eight men, saying, 'Some of these people are really influential in power. I’m really scared of where this is gonna go.'

A source close to Prince Andrew told the Telegraph the Duke had 'no knowledge whatsoever' of any of Epstein’s activities until they were reported in the media.

The prince – nicknamed Air Miles Andy for his love of flying – has courted controversy over his friendship with Epstein, who is on the U.S. sex offenders’ register.

In February it emerged that Andrew had stayed with Mr Epstein during a private trip to New York.