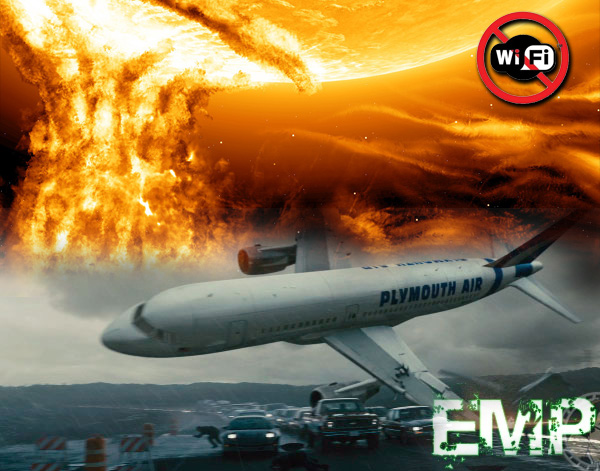 Airplanes would fall from sky, cars would stop, networks fail

Two national-security experts have issued a report through the Heritage Foundation that warns Obama administration officials to start working now to prevent – and mitigate the damage from – an electromagnetic pulse attack on the United States because of the potential for "unimaginable devastation."

"Not even a global humanitarian effort would be enough to keep hundreds of millions of Americans from death by starvation, exposure, or lack of medicine. Nor would the catastrophe stop at U.S. borders. Most of Canada would be devastated, too, as its infrastructure is integrated with the U.S. power grid. Much of the world's intellectual brain power (half of it is in the United States) would be lost as well. Earth would most likely recede into the 'new' Dark Ages," states the report by James J. Carafano, the deputy director of the Kathryn and Shelby Cullom Davis Institute for International Studies and director of the Douglas and Sarah Allison Center for Foreign Policy Studies, and Richard Weitz, senior fellow and director of the Center for Politial-Military Analysis at the Hudson Institute.

The report, which is described by the Heritage Foundation as a "backgrounder," is titled "EMP Attacks – What the U.S. Must Do Now" and was released just days ago, says what is needed right now is for the government to "prevent the threat," by pursuing "an aggressive protect-and-defend strategy, including comprehensive missile defense; modernizing the U.S. nuclear deterrent; and adopting proactive nonproliferation and counterproliferation measures."

Further, measures are needed to add to the "resilience" of the electrical grid and telecommunications systems, including duplicating some essential functions, and "robust" pre-disaster planning should be going on now for "federal, state, local private-sector, non-government organizations and international support," the report said.

Especially, the nation needs to work to "protect the capacity to communicate," the report explains.

"In the words of Arizona Sen. John Kyl, EMP 'is one of only a few ways that the United States could be defeated by its enemies.' The time to prepare is now!"

The new report echoes the warnings carried in a story first broken in WND five years ago about a blue-ribbon commission appointed by Congress to investigate the impact of an EMP attack on the U.S.

An EMP catastrophe, which scientists have warned also could come through a naturally occurring Coronal Mass Ejection from the sun, largely is feared to come from an act of war from an enemy. If there is a nuclear explosion high in the atmosphere over North America the resulting electromagnetic discharge can "permanently disable the electrical systems that run nearly all civilian and military infrastructures," the report said.

"A massive EMP attack on the United States would produce almost unimaginable devastation. Communications would collapse, transportation would halt, and electrical power would simply be non-existent," the report warns.

"All past calamities of the modern era would pale in comparison to the catastrophe caused by a successful high-altitude EMP strike," the report said. "The effects of EMP will immediately disable a portion of the 130 million cars and some 90 million trucks. Since millions of vehicles are on the road at any given time, there will be accidents and congestion that will impede movement…. The U.S. rail network depends directly on electricity. … America's aviation industry will be destroyed…. The U.S. food infrastructure depends heavily on the transportation sector," it warns.

William R. Graham, chairman of the Commission to Assess the Threat to the United States from Electromagnetic Pulse Attack and the former national science adviser to President Reagan, previously testified before Congress and issued an alarming report on "one of a small number of threats that can hold our society at risk of catastrophic consequences."

He identified vulnerabilities in the nation's critical infrastructures that "are essential to both our civilian and military capabilities."

Not taking the steps necessary to reduce the threat "can both invite and reward attack," Graham told the members of Congress at the time.

He described that the attack would come like a swift stroke of lightning, and would immediately disrupt and damage all electronic systems and America's electrical infrastructure.

A detonation over the middle of the continental U.S. "has the capability to produce significant damage to critical infrastructures that support the fabric of U.S. society and the ability of the United States and Western nations to project influence and military power," said Graham.

"Several potential adversaries have the capability to attack the United States with a high-altitude nuclear-weapon-generated electromagnetic pulse, and others appear to be pursuing efforts to obtain that capability," said Graham.

"A determined adversary can achieve an EMP attack capability without having a high level of sophistication. For example, an adversary would not have to have long-range ballistic missiles to conduct an EMP attack against the United States. Such an attack could be launched from a freighter off the U.S. coast using a short- or medium-range missile to loft a nuclear warhead to high altitude. Terrorists sponsored by a rogue state could attempt to execute such an attack without revealing the identity of the perpetrators. Iran, the world's leading sponsor of international terrorism, has practiced launching a mobile ballistic missile from a vessel in the Caspian Sea. Iran has also tested high-altitude explosions of the Shahab-III, a test mode consistent with EMP attack, and described the tests as successful. Iranian military writings explicitly discuss a nuclear EMP attack that would gravely harm the United States. While the commission does not know the intention of Iran in conducting these activities, we are disturbed by the capability that emerges when we connect the dots."

"Even with farsighted mitigation measures there is little question that a nationwide EMP attack would be crippling," it warned. "Thus, while pursuing mitigation, the U.S. should take all possible measures to protect and defend the nation against a ballistic-missile attack that could be used to deliver an EMP strike, as well as pursue aggressive counter-proliferation measures against rogue states developing nuclear weapons."

The report warns such an attack would turn science fiction into reality.

"Airplanes would literally fall from the sky, cars and trucks would stop working, and water, sewer, and electrical networks would fail. Food would rot, medical services would collapse, and transportation would become almost nonexistent," it explains.

The report warned that one criticality is to develop domestic sources for replacement equipment for the electric equipment, transformers and substations that would be damaged.

"The equipment used in the transmission grid is costly, specially produced, and has to be ordered from overseas … Those with the expertise to replace transformers and capacitors are likely to be overwhelmed…"

What would happen already has been documented, the report noted, in the 1977 New York City blackout, although on a much smaller scale.

"Two lightning strikes caused overloading in the electrical power substations of the Con Edison power company. These lighting strikes, the equivalent of a minuscule fraction of [EMP], caused the Indian Point power plant north of the city to fail, as well as the subsequent failure of the Long Island interconnection. … Failure of the Linden-Goethals 230,000-volt interconnection with New Jersey resulted in the protective devices removing overloaded lines, transformers, and cables from service. As a result, a power failure spread throughout the New York area. This blackout lasted only one day, yet resulted in widespread looting and the breakdown of the rule of law throughout many New York neighborhoods. The estimated cost of the blackout was approximately $246 million, and nearly 3,000 people were arrested through the 26-hour period," the report said.

"The blackout in New York City resulted in an immediate breakdown of the social order. The police were outmatched and had no chance of stopping such massive theft, largely having no choice but to stand by watching the looters from a distance. In North Brooklyn, a community of more than a million residents, only 189 police officers were on duty…."

In 2003, a blackout in Ohio, New York, Maryland, Pennsylvania, Michigan and Canada saw "massive traffic jams and gridlock when people tried to get home without traffic lights. … Railways, airlines, gas stations, and oil refineries halted operations. Telephone lines were overwhelmed due to the high volume of calls. Overall, the blackout's economic impact was between $7 billion and $10 billion due to food spoilage, lost production, overtime wages…"

A true EMP attack, the report said, "could prove even more severe."

Further, major disruptions will happen in communications, financial and other computer-dependent parts of society.

Peter Vincent Pry, chief of EMPact America, said the world this past summer dodged a bullet – in the form of a massive solar flare.

The results of that naturally occurring even could be very similar to a nuclear-caused EMP attack, he said.