A 2010 Rockefeller Foundation document entitled “Scenarios for the Future of Technology and International Development” outlines a scenario which results in the death of 13,000 during the 2012 Olympics.

The first worrying prediction begins in 2012 when ‘the pandemic the world had been anticipating for years’, finally hits, infecting nearly 20 percent of world population and claiming 8 million lives. Due to this pandemic, the Rockefeller Foundation outlines how the public will welcome a more authoritative government and a tighter control across all aspects of life, including Biometric IDs for all citizens.

In the document, the Rockefeller Foundation ‘predicts’ that the decade of 2010-2020 will be named “The Doom Decade”, because of a wave of terrorist attacks, natural disasters as well as civil uprisings and financial collapses.

The years 2010 to 2020 were dubbed the “doom decade” for good reason: the 2012 Olympic bombing, which killed 13,000, was followed closely by an earthquake in Indonesia killing 40,000, a tsunami that almost wiped out Nicaragua, and the onset of the West China Famine, caused by a once-in-a-millennium drought linked to climate change. 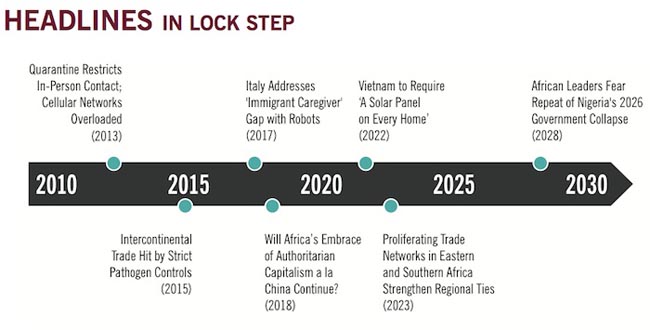 Mirroring events in real life, the document also predicts that by 2015 a large share of the US’ armed forces are recalled from countries such as Afghanistan to be stationed domestically, apparently posse comitatus no longer being a concern.

In 2015, the U.S. reallocated a large share of its defense spending to domestic concerns, pulling out of Afghanistan—where the resurgent Taliban seized power once again.

As is happening right now, the document outlines how nations will lose power over their own finances due to massive debt, apparently handing over financial sovereignty to the banking technocrats.

But the document doesn’t just cover these topics. The growing mistrust in vaccines is covered in the Rockefeller document, where they state that due to corruption within national and global bodies such as WHO, “bogus” vaccines will result in mass deaths. According to the paper, the resulting mistrust in vaccines results in a large number of parents who avoid vaccination, which causes infant and child morality to rise to levels not seen since the 1970s.

In the context of weak health systems, corruption, and inattention to standards—either within countries or

from global bodies like the World Health Organization—tainted vaccines entered the public health systems of several African countries. In 2021, 600 children in Cote d’Ivoire died from a bogus Hepatitis B vaccine, which paled in comparison to the scandal sparked by mass deaths from a tainted anti-malarial drug years later. The deaths and resulting scandals sharply affected public confidence in vaccine delivery; parents not just in Africa but elsewhere began to avoid vaccinating their children, and it wasn’t long before infant and child mortality rates rose to levels not seen since the 1970s.

Technology becomes an increasing theater of battle in the Doom Decade, with cyber terrorism and hacking mafia organizations becoming more and more widespread. A worrying prediction outlined in the document covers “Bio-Hacking” where GMO and DoItYourself-Biotech push the Globalist’s love for Transhumanism forward.

Interestingly, not all of the “hacking” was bad. Genetically modified crops (GMOs) and do-it- yourself (DIY) biotech became backyard and garage activities, producing important advances. In 2017, a network of renegade African scientists who had returned to their home countries after working in Western multinationals unveiled the first of a range of new GMOs that boosted agricultural productivity on the continent.

Just as desired by Globalists for over a hundred years, the developed world begins to fall back into feudalism, with the gap between the rich and poor growing to levels not seen for hundreds of years as the middle class becomes extinct.

The rich moving into fortress like compounds, whereas the poor are forced to move into ghettos. By 2030, the document portrays the “developed” and “developing” nations to no longer be relevant or distinguishable.

The report also outlines several Environmental scenarios stemming from Climate Change which include a new worldwide economic system based on Green Infrastructure by 2018.

The Foundation describes how the resulting collapse of society requires an exodus out of rural areas and into urban environments for survivability, a bizarre take on reality where those living in urban environments are far more restricted in being self sufficient than those in rural areas who have the ability to more easily grow their own food.

Another mirror to Agenda 21 is the documents prediction that only the very rich will have the ability to travel, as prices skyrocket and the restrictions in the name of security reach such high levels that the poor simply cannot travel from their communities.

As with other such documents such as those released by RAND and the MoD in the UK, these predictive papers are a window into the think-tanks who help shape world events. Where the documents are always portrayed as simple predictions, it is important to realize that many such papers have been eerily accurate in the past and thus must be considered when such events unfold in the near future.