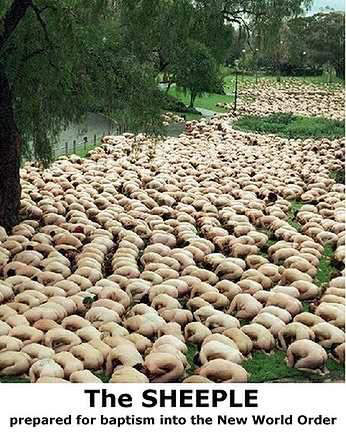 People in crowds behave just like sheep, scientists claim, by blindly following one or two people who seem to know where they are going.

Researchers at Leeds University believe their findings could have important applications, notably in the management of disasters.

The team, led by Prof Jens Krause, conducted a series of experiments in which volunteers were told to walk randomly around a large hall without talking to each other. A select few were then given more detailed instructions.

The results published today show that it takes a minority of just 5 per cent of what they called "informed individuals" to influence the direction of a crowd of a minimum of 200 people. The remaining herd of 95 per cent follow without realising it.

"There are strong parallels with animal grouping behaviour," says Prof Krause, who reports the work with John Dyer in the Animal Behaviour Journal, with colleagues at the Universities of Oxford and Wales Bangor.

"We've all been in situations where we get swept along by the crowd but what's interesting about this research is that our participants ended up making a consensus decision despite the fact that they weren't allowed to talk or gesture to one another.

"In most cases the participants didn't realise they were being led by others."

The work follows another study by Dr Simon Reader of Utrecht University that showed that most of us are happy to play follow-my-leader, even if we are trailing after someone who does not really know where they are going.

"Even more striking, that study found that even when we are shown a faster route, we still prefer to stick with the old one and tell others to take the long road too.

That discovery could have lethal implications when it comes to evacuating a building or ship in an emergency, when people would likely stick to the familiar evacuation route, even if slower than an alternative.