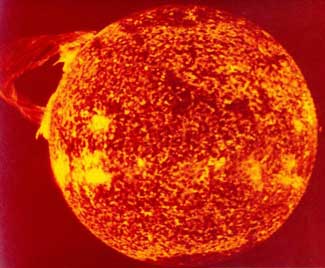 Scientists are deadlocked over the severity of the next sunspot cycle, which could produce powerful solar storms that can disrupt communication systems on Earth.

A panel of space weather forecasters has been sifting through about three dozen predictions from 15 nations that differ widely in how intense the next solar cycle will be. The group, run by the National Oceanic and Atmospheric Administration and funded by NASA, aims to make an official prediction in spring 2007.

While scientists have observed sunspots - dark, cool blemishes - on the sun's surface since the days of Galileo, they've been unable to accurately forecast the severity of the eruptions associated with the spots. Sunspots are best known for triggering solar flares.

The debate over the next cycle, known as solar cycle 24, has been "passionate," said Douglas Biesecker, a physicist at NOAA's Space Environment Center who heads the panel.

No clear prediction has emerged yet from the various computer models that simulate the sun's activity, Biesecker said Tuesday during a meeting of the American Geophysical Union.

Forecasts vary so wildly that predictions for the peak sunspot number range from 42 to 185.

"You have scientists who each have their own idea of what the cycle is going to be and everybody believes they're right," Biesecker said.

Governments and companies increasingly rely on space weather forecasts to guard against possible failures of power grids and radio communications when solar storms explode with massive bursts of magnetic energy and radiation that barrel toward Earth at millions of miles per hour.

Solar activity occurs when the sun's magnetic field lines twist and turn as it rotates. The process spews out millions of tons of superheated charged particles into space.

Scientists at the National Center for Atmospheric Research made headlines earlier this year when they predicted that solar cycle 24 will be between 30 percent and 50 percent stronger than the current one and will begin a year later. The researchers based their forecast on a sophisticated computer model that others contend has not yet been proven reliable.

The intensity of the next sunspot cycle could have consequences for the aging Hubble Space Telescope, which has beamed back stunning images of star births and galaxies, said Dean Pesnell, a project scientist at NASA's Goddard Space Flight Center who predicts a weak solar cycle.

A weak cycle would mean that Hubble would experience less atmospheric drag and stay in orbit longer while a strong cycle could force NASA to boost the telescope so that it stays in place, Pesnell said.

David Hathaway, a researcher at NASA's Marshall Space Flight Center who predicts a strong sunspot cycle, said the biggest hurdle is trying to forecast how the sun will act with little data to work with.

"It's like listening to a freight train in the distance to estimate the size of the train," Hathaway said.