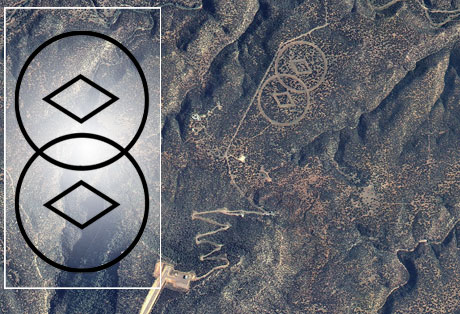 A Place in the Desert for New Mexico's Most Exclusive Circles
From: washingtonpost.com

From the state that gave us Roswell, the epicenter of UFO lore since 1947, comes a report from an Albuquerque TV station about its discovery of strange landscape markings in the remote desert. They're etched in New Mexico's barren northern reaches, resemble crop circles and are recognizable only from a high altitude.

Also, they are directly connected to the Church of Scientology.

The church tried to persuade station KRQE not to air its report last week about the aerial signposts marking a Scientology compound that includes a huge vault "built into a mountainside," the station said on its Web site. The tunnel was constructed to protect the works of L. Ron Hubbard, the late science-fiction writer who founded the church in the 1950s.

The archiving project, which the church has acknowledged, includes engraving Hubbard's writings on stainless steel tablets and encasing them in titanium capsules. It is overseen by a Scientology corporation called the Church of Spiritual Technology. Based in Los Angeles, the corporation dispatched an official named Jane McNairn and an attorney to visit the TV station in an effort to squelch the story, KRQE news director Michelle Donaldson said.

CNN report on the "Scientology Circles"


Trementina Base
According to the CST, the purpose of the base is to provide storage space for an archiving project to preserve L. Ron Hubbard's writings, films and recordings for future generations. Hubbard's texts have been engraved on stainless steel tablets and encased in titanium capsules underground. The project began in the late 1980s.

The base includes a number of dwellings and the archives themselves, the latter in a network of underground tunnels. The base also has its own private, concrete airstrip, the San Miguel Ranch Airport (NM53); it is not shown on FAA sectional charts or in navigation databases by the owner's request.