Evidence of the potential genetic blending between Europeans and Asians has been discovered by a team of researchers led by the Universitat Autònoma de Barcelona (UAB) within the remains of Scythian warriors living over 2,000 years ago in the Altai region of Mongolia.

The Scythians were already documented as the first large Eurasian culture, but were believed to be the product of migration from Europe. The researchers now suggest that the genetic blending is actually a result of the expansion of Scythian culture over the mountains.

Studies on ancient mitochondrial DNA of this region suggest that the Altai Mountains played the role of a geographical barrier between West and East Eurasian lineages until the beginning of the Iron Age.

After the 7th century BC, coinciding with Scythian expansion across the Eurasian steppes, a gradual influx of East Eurasian sequences in Western steppes is detected. However, the underlying events behind the genetic admixture in Altai during the Iron Age are still unresolved: 1) whether it was a result of migratory events (eastward firstly, westward secondly), or 2) whether it was a result of a local demographic expansion in a ‘contact zone’ between European and East Asian people.

The Altai is a mountain range in Central Asia occupying territories of Russia and Kazakhstan to the west, and of Mongolia and China to the east. Historically, the Central Asian steppes have been a corridor for Asian and European populations, resulting in the region’s large diversity in population today. In ancient times however the Altai Mountains, located in the middle of the steppes, represented an important barrier for the coexistence and mixture of the populations living on each side. And so they lived isolated during millennia: Europeans on the western side and Asians on the eastern side.

Research conducted by the UAB, the Institut Català de Paleontologia Miquel Crusafont and the Institute of Evolutionary Biology has shed new light on when and how this Eurasian genetic blending took place.

The team extracted and analysed mitochondrial DNA (inherited from the mother, it allows us to trace our ancestors) from the bones and teeth of 19 Pazyryk skeletons dating to the Bronze Age (7th to 10th century BCE) and from the Iron Age (2nd to 7th century BCE) from the Mongolian Altai Mountains.

The remains were extracted from the tombs discovered seven years ago, in which the skeletons of Scythian warriors were discovered and represented the first scientific evidence of this culture in East Asia.

The results obtained demonstrate that the population from the Iron Age, corresponding to the time when the Scythian culture resided in the Altai Mountains, had a perfect 50/50 mix of European and Asian mitochondrial DNA lineages or sequences, while previous populations showed no signs of this lineage mixture: the DNA analysed in the tombs located in Russia and Kazakhstan belong to European lineages, whereas DNA from the eastern part, in Mongolia, contained Asian lineages. 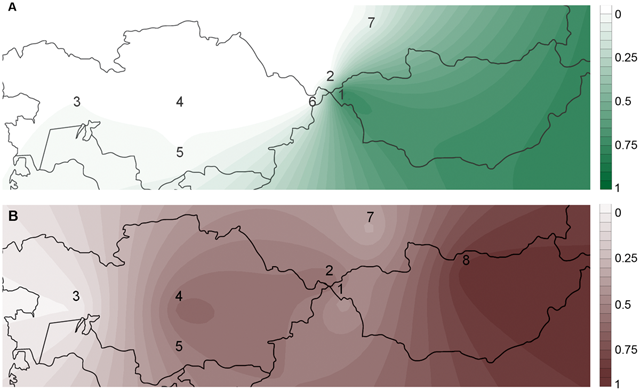 “The results provide exceptionally valuable information about how and when the population diversity found today in Central Asian steppes appeared. They point to the possibility that this occurred in Altai over 2,000 years ago between the local population on both sides of the mountain range, coinciding with the expansion of the Scythian culture, which came from the west”, explains Assumpció Malgosa, professor of Biological Anthropology at UAB and coordinator of the research.

Studies conducted until now on ancient DNA samples from the Altai region already indicated that the Scythians were the first large population to be a mixture between Europeans and Asians. However, the only populations to be studied were those on the western part of the Eurasian steppes, suggesting that this mixture was due to population migrations from Europe to the east.