Secretive X-37B Robot Space Plane Returns to Earth on Autopilot - What was the Mission? 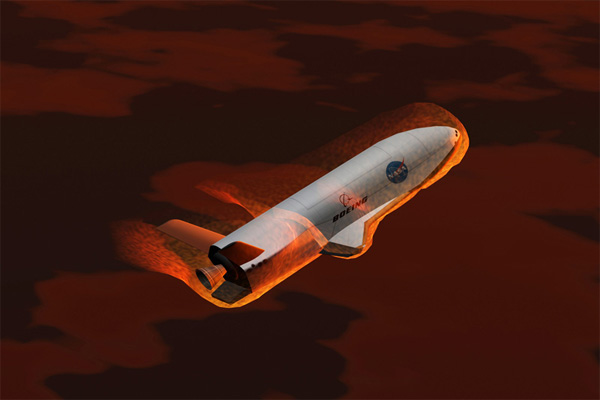 The robotic X-37B space plane landed at Vandenberg Air Force Base in California to end its maiden voyage. The space plane, also known as Orbital Test Vehicle 1, glided back to Earth over the Pacific Ocean before landing at the revamped Vandenberg runway at about 1:16 a.m. PST (0916 GMT) today (Dec. 3).

"Today's landing culminates a successful mission based on close teamwork between the 30th Space Wing, Boeing and the Air Force Rapid Capabilities Office," said Lt Col Troy Giese, X-37B program manager from the AFRCO, which oversaw the mission. "We are very pleased that the program completed all the on-orbit objectives for the first mission."

In all, the X-37B space plane spent more than 220 days in orbit. Air Force officials said earlier this week that the X-37B could land anytime between Friday and Monday (Dec. 3 to Dec. 6).

The Air Force has kept the exact nature and cost of the X-37B's secretive mission a closely guarded secret, but some analysts and skywatchers have speculated that the spacecraft served as an unmanned orbital spy platform.

he Air Force launched the robot space plane atop an equally unmanned Atlas 5 rocket on April 22. Since then, the spacecraft has orbited Earth, at times tracked by meticulous skywatchers who first spotted the spacecraft in space using telescopes, then noticed its apparent manuevers to change orbits. Video of the X-37B in space.

"This is a historical first, not only for Vandenberg Air Force Base, but for the Air Force and our nation to receive a recoverable spacecraft here and really take a step forward in advancing unmanned space flight," said 30th Space Wing commander Col. Richard Boltz in a statement before the landing.

The X-37B space drone is robotic winged spacecraft that looks in many ways like a miniature space shuttle. It was built by Boeing's Phantom Works Division in Seal Beach, Calif., and can fly long, extended missions because of its solar array power system, which allows it to stay in orbit for up to 270 days, Air Force officials have said.

Originally, NASA used the X-37B space plane as an experimental test bed until funding for the project ran out in 2004. The vehicle then passed to the Defense Advanced Research Projects Agency and was ultimately turned over to the Air Force in 2006.

Before the April launch of the Orbital Test Vehicle 1 flight, Gary Payton, Air Force deputy undersecretary of space programs, said that the X-37B is not a space weapon.

"I don't know how this could be called a weaponization of space," Payton told reporters at the time. "Fundamentally, it's just an updated version of the space shuttle kinds of activities in space."

But some facts about the X-37B spacecraft are well known.

For example, the spacecraft has two wings, a payload bay about the size of a pickup truck bed and black heat-resistant tiles to withstand the searing hot temperatures of atmospheric re-entry.

This SPACE.com graphic of the X-37B depicts the characteristics and capabilities of the unmanned space plane. 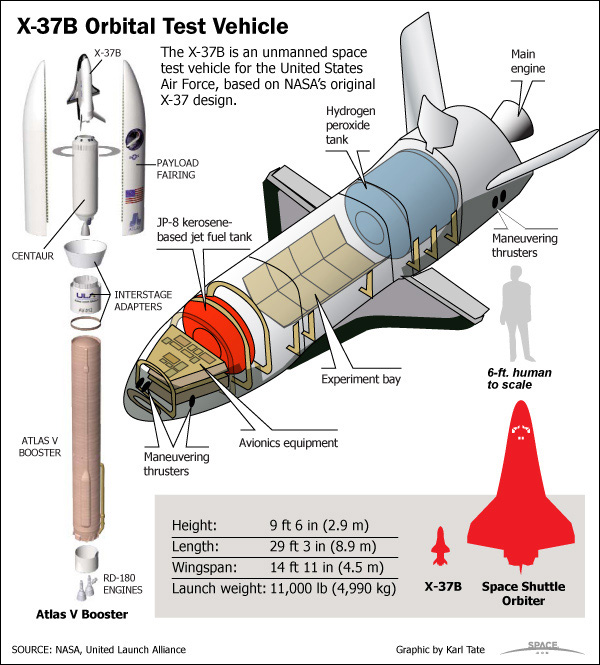 The X-37B launches like a rocket and glides back to Earth like NASA's space shuttles, but instead of a single tail fin at the rear, the X-37B has two stabilizers, called "ruddervators," sprouting up in a "V" shape.

The vehicle was also equipped with a destruct mechanism, so Air Force officials could destroy it by remote control if it veered off course while gliding over the Pacific Ocean toward the Vandenberg Air Force Base.

To prepare for the mini-shuttle's landing, a huge team of workers had to replace some 658 steel along the along the centerline of Vandenberg 15,000-foot (4,572-meter) runway because the older ones could pose a hazard to the X-37B vehicle's tires, according to the Santa Maria Times newspaper.

The Air Force has already ordered a second X-37B, the Orbital Test Vehicle 2, which is slated to launch on another test flight sometime in the spring of 2011.

But for now, Air Force officials said they were ecstatic to see the successful return of the first X-37B spacecraft.

"With it being such a unique mission for the base, it is exciting to be a part of this historic landing," said Capt. Dariusz Wudarzewski, 2nd ROPS range operations commander. "For how long we have been working on it, I think everyone is really excited to see it culminate."