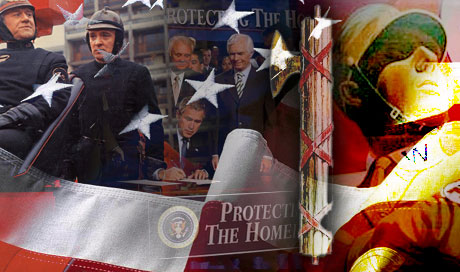 The end of Free Speech in America has arrived at our doorstep. It's a new law called the Violent Radicalization and Homegrown Terrorism Prevention Act, and it is worded in a clever way that could allow the U.S. government to arrest and incarcerate any individual who speaks out against the Bush Administration, the war on Iraq, the Department of Homeland Security or any government agency (including the FDA). The law has already passed the House on a traitorous vote of 405 to 6, and it is now being considered in the Senate where a vote is imminent. All over the internet, intelligent people who care about freedom are speaking out against this extremely dangerous law: Philip Giraldi at the Huffington Post, Declan McCullagh at CNET's News.com, Kathryn Smith at OpEdNews.com, and of course Alex Jones at PrisonPlanet.com

This bill is the beginning of the end of Free Speech in America. If it passes, all the information sources you know and trust could be shut down and their authors imprisoned. NewsTarget could be taken offline and I could be arrested as a "terrorist." Jeff Rense at www.Rense.com could be labeled a "terrorist" and arrested. Byron Richards, Len Horowitz, Paul Craig Roberts, Greg Palast, Ron Paul and even Al Gore could all be arrested, silenced and incarcerated. This is not an exaggeration. It is a literal reading of the law, which you can check yourself here: http://thomas.loc.gov/home/gpoxmlc110/h1955_rfs.xml

Note that this means the "planned use of force to promote a political or social belief" would be considered an act of terrorism. This all hinges on the definition of "force," of course. Based on the loose use of logic in Washington these days, and the slippery interpretation of the meaning of words, "force" could mean:

You get the idea. "Force" could be defined as practically anything. And since the "planned use of force" would be considered a criminal act of terrorism, anyone who simply thinks about a grassroots action campaign would be engaged in terrorist acts.

If you stopped someone on the street and handed them a Bible, for example, this could be considered an act of terrorism ("...use of force to promote the individual's religious beliefs...")

If you sent a barrage of angry letters to Washington about global warming and the destruction of the environment by the U.S. military, this could also be considered an act of terrorism ("...to promote the individual's political beliefs...")

If you believe in same-sex marriage and you wrote a letter threatning a sit-in protest in front of your state's capitol building, this could also be considered an act of terrorism, even if you never carried it out! ("...planned use of force to promote a social belief...")

The United States is on the fast track to fascism, and the Congress is working right alongside this nation's traitorous leaders to criminalize any thoughts, words or speeches that disagree with current government policies regarding war, terrorism, domestic surveillance and civil liberties. Simply speaking out against the war on Iraq could soon be labeled a crime. Merely thinking thoughts against the war on Iraq could be considered a criminal act.

Must-see video: Naomi Wolf's lecture on 10 steps to fascism
There's a video lecture you simply MUST watch. It's by Naomi Wolf, author of The End of America. She covers this topic with great elegance and a deep understanding of history.

In her lecture and book, Naomi reveals the ten steps to fascist, then reveals how the United States of America is pursuing all ten! This S.1959 legislation, the Violent Radicalization and Homegrown Terrorism Prevention Act, represents one of the ten steps to achieve a fascist state!

It is designed to squash all opposition to the State's ongoing march towards blatant fascism, where secret police and secret prisons dominate the law enforcement landscape, stripping U.S. citizens of all civil liberties and Constitutional protections.

Thoughtcrimes are about to become a reality in the United States of America, and Congress is pushing this through as quickly as possible so that each individual member of Congress can claim that he or she is "against terrorism." But this bill doesn't merely target terrorism: It targets anyone who speaks or even thinks thoughts against the U.S. federal government.

With this bill, the U.S. government is officially labeling the People of the United States as criminals. It is drawing a line in the sand and stating that from now on, it's the Government vs. the People.

If we don't stop this bill from becoming law, we are lost as a nation.

There is no turning back from tyranny once the government turns its own citizens into criminals, enforcing only the thoughts, ideas, words and speeches that it approves or tolerates. Everything is at stake here!

Take action now, or lose your freedoms foreverIf you live in the U.S., it is urgent that you call your senators right now and voice your strong opposition against this extremely dangerous law.

Here are the phone numbers for the U.S. Senate switchboard:

How to do this:

1) Make sure you know the names of your Senators.
2) Call the U.S. Senate switchboard using one of the numbers above.
3) Ask to speak to the offices of your Senators.
4) Tell them you are strongly opposed to S. 1959, the Violent Radicalization and Homegrown Terrorism Prevention Act
5) Ask for their fax number.
6) Follow up your phone call with a written, signed letter that you fax to your Senators.

Stopping this bill from becoming law is the single most important thing all Americans can do right now. If this becomes law, all free speech about health freedom, the crimes of the FDA, the crimes of the Bush Administration, America's role in global warming and any other topics could all be criminalized. YOU could be labeled a terrorist, kidnapped by government thugs, taken from your home, thrown in a secret prison, denied access to legal representation, denied due process and essentially "disappeared" into a system of such corruption and evil that it now begins to blatantly mirror Nazi Germany.

Think it couldn't happen here? It's happening right now! This is exactly how it happened in Nazi Germany. First, burn the Reichstag and blame it on the "enemy." Pass new police state laws. Disarm the people. Spread fear. Erect secret prisons and secret police. Call anyone who disagrees with you a "traitor." Control the mainstream media. Sound familiar? This is all happening right now in the United States of Amerika, and if we don't work to stop it, this nation will rapidly devolve into a fascist police state where no one is truly free.

We are but a few small steps away from it right now. All it would take is one dirty bomb in a major U.S. city. Bush would declare Martial Law and take over the National Guard. Troops on the streets. Anyone who writes a blog against the government would be arrested. Authors of "alternative" books would be kidnapped and have their books burned on the street. It could all happen at the stroke of a pen. The infrastructure for tyranny is in place right now, just waiting to be invoked.

Our best weapons: Non-violent protest and speaking the truthHow can we fight back against this onslaught of tyranny? We must use what remaining free speech freedoms we have right now to alert our fellow citizens to what's happening. We must rise up and tell the truth while urging our representatives in Washington to resist the temptation to vote for more "anti-terrorism" legislation that only works to enslave the American people.