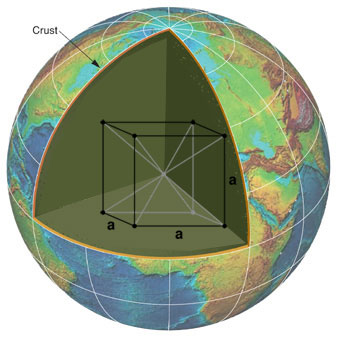 Swedish researchers present in today’s Web edition of the journal Science evidence that their theory about the core of the earth is correct. Among other applications, the findings may be of significance for our understanding of the cooling down of the earth, and of the stability of the earth’s magnetic field.

It has long been known that the inner core of the earth, a sphere consisting of a solid mass with a radius of about 1,200 km, is mainly made up of iron. However, seismic observations have shown that elastic waves pass more rapidly through this core in directions that are parallel to the earth’s axis of rotation than in directions parallel to the equator-a phenomenon that has not been previously explained. At the high temperatures that prevail in the core of the earth, these waves should pass at the same speed regardless of their direction.

In the present study, scientists from Uppsala University and KTH present an explanation for this puzzling characteristic. The publication is part of a series of articles published by the same research team in Nature and Science. Initially, in 2003, they published strong theoretical proof that the earth’s core assumes the so-called body-centered cubic crystal structure at high temperatures-a structure that despite its high degree of symmetry evinces a surprisingly high level of elastic anisotropy, that is, its elastic properties are contingent on direction. This theory about the crystal structure directly contradicted the then prevailing view, but since then the theory has found both experimental and theoretical support.

In this new study the researchers present simulations of how seismic waves are reproduced in iron under the conditions that prevail in the core of the earth, showing a difference of about 12 percent depending on their direction-which suffices as an explanation for the puzzling observations. First the trajectories of movement were calculated for several million atoms in strong interaction with each other. On this basis, the scientists were then able to determine that the progress of the sound waves was actually accurately described in the computer-generated model for iron under the conditions prevailing in the core of the earth.

“We found that the body-centered cubic structure of iron is the only structure that could correspond to the experimental observations,” says Börje Johansson, professor of condensed-matter theory at Uppsala University.

“This study opens new perspectives for our understanding of the earth’s past, present, and future,” says Natalia Skorodumova, a researcher at the Department of Physics and Materials Science.

In their studies these researchers have used models based on the so-called density-functional theory for which Walter Kohn was awarded the 1999 Nobel Prize. The calculations were carried out using the most powerful parallel supercomputers in existence, in Stockholm and Linköping.

The body-centered cubic crystal structure forms a cube with atoms in each corner and a further atom in the middle of this cube. It is oriented in such a way that its great diagonal is directed along the earth’s axis of rotation, which makes it possible for the iron to evince sound propagations with the velocities observed.