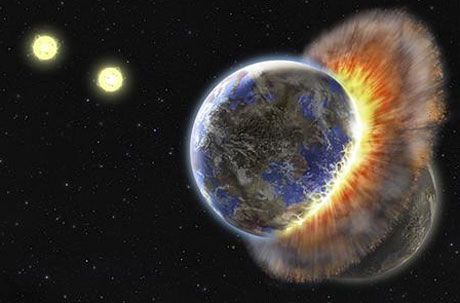 Take a look at the related links below, there’s research that suggest that a planetary collision took place closer to home.

Masses of dust floating around a binary star system suggest that two Earth-like planets obliterated each other in a violent collision, U.S. researchers reported on Friday.

"It's as if Earth and Venus collided with each other," Benjamin Zuckerman, an astronomer at the University of California Los Angeles, who worked on the study, said in a statement.

"Astronomers have never seen anything like this before; apparently major, catastrophic, collisions can take place in a fully mature planetary system."

Writing in the Astrophysical Journal, the team at UCLA, Tennessee State University and the California Institute of Technology said it spotted the dust orbiting a star known as BD +20 307, 300 light-years from Earth in the constellation Aries.

A light-year is the distance light travels in a year, or about 6 trillion miles. So the observations are, in essence, looking back in time 300 years.

"If any life was present on either planet, the massive collision would have wiped out everything in a matter of minutes: the ultimate extinction event," said Gregory Henry of Tennessee State University.

BD +20 307 appears to be composed of two stars, both very similar in mass, temperature and size to the Earth's sun. They spin about their common center of mass every 3 1/2 days or so.

"The planetary collision in BD +20 307 was not observed directly but, rather, was inferred from the extraordinary quantity of dust particles that orbit the binary pair at about the same distance as Earth and Venus are from our sun," Henry said.

"If this dust does indeed point to the presence of terrestrial planets, then this represents the first known example of planets of any mass in orbit around a close binary star."

In July 2005, the team reported it had spotted the system, then believed to consist of a single star. It was surrounded by more warm orbiting dust than any other sun-like star known to astronomers.

"This poses two very interesting questions," said Tennessee State's Francis Fekel. "How do planetary orbits become destabilized in such an old, mature system? Could such a collision