Sweden's new wiretapping law 'much worse than the Stasi' 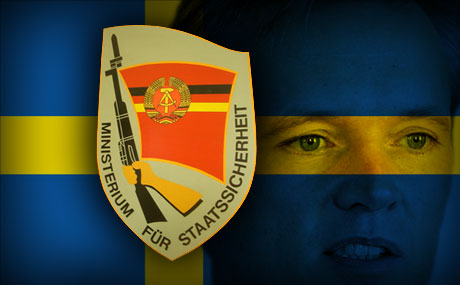 With just a week to go (published June 10th) before the Swedish parliament is expected to pass a controversial wiretapping law, Pirate Party leader Rickard Falkvinge urges people to do all they can to block the legislation.

On June 17th the Swedish parliament is set to vote on the introduction of a new "signal surveillance" law.

What the law means is that all telephone and internet operators will be forced to attach a large cable to the state's supercomputer, where the state will be able to keep a record of everything said in telephone conversations, surfed on the web or written on the internet.

The law can best be described by the more explanatory term "general surveillance". Instead of just criminal suspects having their phones tapped, now everyone will be tapped via their phones, emails, web surfing, faxes etc.

But the state won't keep a record of everything. First it will scan all phone calls, emails and so on, in real time. Anything that is "considered interesting" on the basis of 250,000 search criteria, will be saved for further investigation.

All our phone calls, emails and surfing habits will be observed by Sweden's National Defence Radio Establishment (Försvarets Radioanstalt - FRA), which is why the proposed legislation is known as the "FRA law".

There are no courts involved, and the government and all its agencies - including the police and the security police - will be able to snoop around in the tapped phone and email correspondence of its citizens.

This is much, much worse than the East German Stasi, which was only capable of tapping a small sector of the population. This is also something that has been pointed out by German members of parliament with first-hand experience of the Stasi.

Proponents of the law say it "only concerns cross-border communications". Unfortunately this is a bare-faced lie. Records of communications will be kept at 20 nodal points, strategically placed to capture all communications that cross Sweden's borders. But any internal communications that happen to come into contact with any one of these nodes will also be analyzed by the state. Essentially this means that everyone will be affected since, for technical reasons, most phone calls and emails between two Swedes pass through another country.

Proponents say that "this has absolutely nothing to do with Swedes; FRA isn't allowed to investigate Swedes if there is no substantial cause". This is a dishonest formulation. Another way of saying exactly the same thing would be: "FRA may snoop on Swedes as part of this mass wiretapping scheme if certain criteria are met". In fact, the entire statement is dishonest, since the legislation up for debate only concerns signal surveillance for the military. What these people don't mention is that the FRA already carries out surveillance for the police using exactly the same staff and the same wiretapping network.

Proponents say that "only a very small amount of information will be listened to", and refer to the pieces of information that will be sifted out for further examination. This is also a direct lie. Everything will be listened to. Whatever information is then selected for further examination is irrelevant; the violation of personal integrity occurs when the state gives itself access to its citizens' private communications, not when one of the search terms it uses to filter the data happens to match.

Democracy is reliant on the transparency of power, not the transparency of citizens. All places where the opposite has been the case - where it has been impossible to examine the powers that be, while citizens lack any right to a private life - have been really nasty places to live.

Signal surveillance is supposed to protect us against external threats. In reality, however, it is the surveillance itself that constitutes a direct threat against Swedish democracy.

Aftonbladet has written about the law today (the first time old media have really contributed to the debate). Unfortunately they present the proponents' propaganda as fact. Proponents of the law have shown themselves to be completely unreliable. On May 31st I put forward evidence [in Swedish] showing that they know they are breaking the constitution but they just don't care.

The Pirate Party has long campaigned for the right to a private life. For example, we held a demonstration in central Stockholm recently demanding the right to civil liberties and for an end to all plans for general surveillance.

A campaign site has just gone online called stoppafralagen.nu (Stop the FRA law) with more information about this draconian piece of legislation.

It's high time to get involved. Write to your local member of parliament, talk to friends and acquaintances about what's happening. Anything. Just do something. Before it's too late.