Jan 29, 2014 By Henrik Palmgren | redice.tv
In a compelling find, divers in Sweden have discovered an ancient underwater site, and recovered relics dating back to the stone age. The discovery, deep beneath the Baltic sea, is described as one of the earliest Swedish settlements, but rarer still as the people of the time were all nomadic and without traditional villages, thus the finds are ’one of a kind’.

The relics are apparently in remarkably well preserved condition due to the water and the black, gel-like ’Gyttja’ sediment. The divers have unearthed items such as animal bone carvings, flint tools animal horns, and even rope.

The site’s age, 11,000 years, is on par chronologically with the much recognized and celebrated Turkish site - Gobekli Tepe. The Baltic site might not be as elaborate in terms of what has been discovered so far, but more work needs to be done to see what is actually down there. So far, the silence from Swedish authorities and the cultural departments is astonishing. There’s no recognition or encouragement of this find. Perhaps this is because Swedish authorities are loathe to recognize Swedish accomplishments, and even admit to ’hating’ Swedish culture, and all things to do with Norse history.

This is all the more reason to shine a spotlight on the hidden history of the deep Baltic site and the ancient peoples who came before.

More on these incredible discoveries below...

[...]Archaeologists believe the relics were left by Swedish nomads 11,000 years ago and the discovery may be evidence of one of the oldest settlements ever found in the Nordic region. 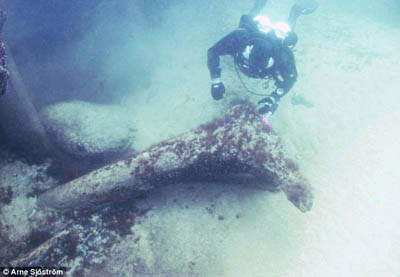 Divers in Sweden have discovered a rare collection of Stone Age artefacts buried beneath the Baltic Sea, pictured. Archaeologists believe the relics were left by Swedish nomads 11,000 years ago and the discovery may be evidence of one of the oldest settlements ever found in the Nordic region, dubbed ’Sweden’s Atlantis’
Some of the relics are so well preserved, reports have dubbed the find ’Sweden’s Atlantis’ and suggested the settlement may have been swallowed whole by the sea in the same way as the mythical island in the Atlantic Ocean.

The artefacts were discovered by Professor Bjorn Nilsson from Soderton University, and a team from Lunds University, during an archaeological dive at Hano, off the coast of Skane County in Sweden.

Among the most notable items found include a harpoon carving made from an animal bone, and the bones of an ancient animal called aurochs.

Aurochs are ancestors of modern-day cattle and lived through Europe before becoming extinct in the early 1600s. The last reported auroch died in Poland in 1627.

This find is significant because it suggests a date for when these items would have been used.

Many of the artefacts have been preserved because the diving location is rich in a sediment called gyttja.

Black, gel-like Gyttja is formed when peat begins to decay. As the peat is buried, the amount of oxygen drops and it is thought this lack of oxygen prevented the organic artefacts from being lost.