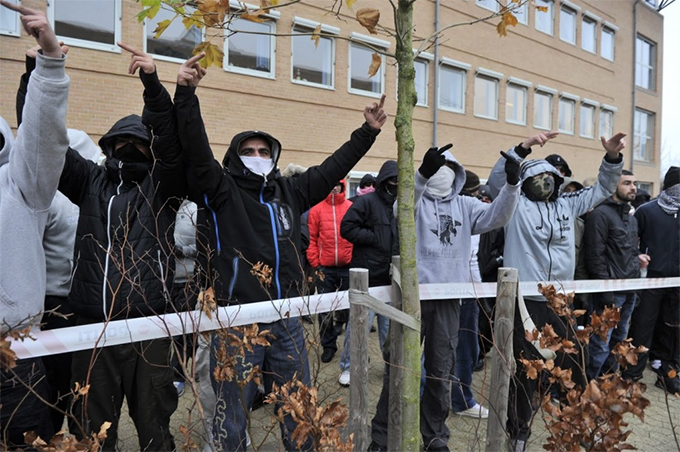 An extensive report mapping out 55 no-go zones was released Oct. 24, showing where law enforcement has all but handed control to criminal gangs.

The no-go areas heavily coincide with the map of the 186 “exclusion areas” aka. crowded, predominantly Muslim immigrant ghettos, where education is low, employment is lower and the only local business thriving is drug dealing.

As the real law backs away, organized crime emerges to take its place. The police report notes “a wider clientel [in the areas] are increasingly turning to the criminal authorities for justice” in a Godfather-like fashion. Unofficial courts and punishments are often meted out according to the codes of the home cultures of the dominant gangs. The report also points out that there are vehicle checkpoints at the borders of some of these areas. The bad news is it’s not the police doing them; it’s the gangs securing home turf against law enforcement and rival gangs.

The gangs try to keep a semi-low profile in many areas so as not to interfere with the “business” of dealing drugs, protection rackets and similar illicit activity.

Others seek active confrontation with police to establish absolute dominance.

A pair of policemen in May were in pursuit of a suspect and unwisely entered the no-go zone of the southern city of Landskrona. Their car was rammed and the officers were forced out of the car. They were cornered by a crowd of some 50 hostile thugs and drew their weapons to hold them back and called for immediate backup.

Several nearby patrol cars responded to the call and sped towards the scene, only to be ordered to stop half a mile away — just outside the no-go border. The police commander didn’t send the backup units in, fearing escalation and all-out war. The cornered police officers were left to fend for themselves. As luck would have it, one of the officers knew a few residents who interfered and convinced the thugs to let them leave.

In response to these no-go zones, the Swedish police is expanding its soft approach of dialogue and understanding. After the extensive 2013 Stockholm ghetto riots with hundreds of burned cars and buildings, police responded by mostly staying away and sending forth special “dialogue officers” to grill halal hot dogs with the miscreants and make them see the errors of their ways.

Starting next year, the Stockholm Policy Academy will be moved to Södertörns Högskola, where the new curriculum will be “progressive” with more focus on cultural sensitivity, ethical awareness, gender issues and more. The aspiring police officers will achieve “greater understanding of the intercultural perspective.”