Swedish politician: US is the true cause of the masses of refugees from the Middle East 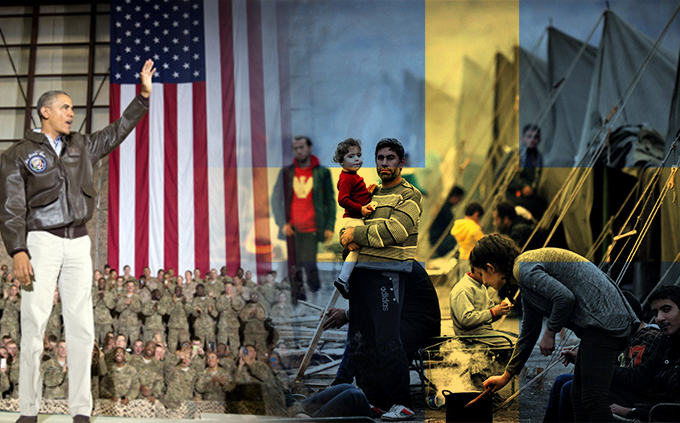 Editors Note: And who controls US foreign policy? Listen to Jeff Gates.

The present Swedish debate about war refugees from the Middle East is an example of peer restricted expression. In the name of political correctness or perceived decency, any questioning of maximum generosity in opening Swedish borders for the refugees is indignantly rejected by the official mainstream. We have a humanitarian duty towards those who are forced to flee from areas ravaged by war, and there is no excuse for not opening our borders to them. – Sure.

BUT, what about exercising our brains and identifying the root of the evil? What about trying to stop the refugee problem from arising in the first place? – What about applying an overall holistic perspective to detect the real, original cause of the problem? – And demand that those who caused the problem also take care of its consequences? – And that they immediately stop causing any more of it?

Our politically mandated media will not discuss who is ultimately responsible for the endless stream of refugees. OK, they have us believe that it is all caused by terrorist organizations, by Muslim fanatics, against whom all the military might of the world is powerless.

And yet, we donÂ´t need to be very brilliant or dig very deep to clearly see who and what is the real cause of todayÂ´s refugee problem.

Who caused the devastation of Iraq with a million dead and many more mutilated, disabled, bereaved, and homeless? – Admittedly without reason or provocation.

Who caused the same thing in Libya, and now in Syria?

Not to mention Afghanistan and several more countries in Africa.

As you may realize, the culprit is not a spontaneously self-organized little group of fanatic islamists, that neither the US nor NATO is able to contain. If you really thought that, think again!

The USA has spent many trillions of dollars during the last decade alone, on its ”defense” against these dangerous terrorists all over the world. And it is this ”defence” which, without provocation, bombed to smithereens more than half a dozen Muslim countries and thus caused the profuse stream of refugees to the affluent countries of the EU.

Incidentally, it is now well known that both Al Qaeda and ISIS were created, funded, trained and armed by the CIA and other US security and military agencies themselves, in order to stir up violence that could then be used as excuses to intervene with military force towards covert political and financial ends. All according to objective international analysts, coinciding with highly credible sources within the US establishment itself.

Is it then reasonable to expect small countries like Sweden to tacitly accept the responsibility of caring for the resulting destitute refugees?

Please do not misunderstand me: I am not at all implying that we should close our hearts and our doors to people in need. But however wealthy we may be perceived to be per capita, Sweden is still a small economy with limited resources.

A resource that we do have, and that is not subject to physical limitations, is a global reputation as champions of peace, freedom, equality, and human rights.

History has taught us that those who acquiesce in silence to criminal deeds are guilty as partners in crime.

If we want to see an end to the wars, the mass murders and genocides, the destruction and the waves of refugees, then all right-minded people and countries must join and make it clear that we know what is going on and will no longer be passive accomplices of grievous war crimes by remaining silent.

Such a stance may end up costing us more, financially, than just silently taking care of as many refugees as we can. But if we succeed in putting an end to the wars, then our sacrifice will not just have given asylum to a fraction of a percent of the refugees, as now, but it may have saved millions of lives and immeasurable cultural values.

It would be a mistake to write off such an act as a shot in the air. All the armies of the world will ultimately be powerless against a sufficiently large number of engaged people joined for a common and just cause.

” Never doubt that a small group of thoughtful, committed citizens can change the world; indeed, it’s the only thing that ever has”.