The Birth of a Police State: UK Police to be Granted Sweeping New Powers 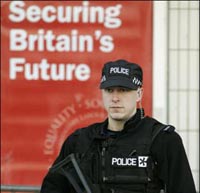 The UK Government is about to pass legislation which will make any behaviour perceived to potentially ‘cause nuisance or annoyance’ a criminal offence. The Anti-Social Behaviour, Crime and Policing Bill also grants local authorities, police and even private security firms sweeping powers to bar citizens from assembling lawfully in public spaces. The Bill has successfully passed through the House of Commons without issue, and is now in the latter stages of review by the House of Lords, after which it will receive Royal Assent and become Law. Those who refuse orders under the new rules will face arrest, fines and even prison time.

The Anti-Social Behaviour, Crime and Policing Bill, purports to simplify this legacy of New Labour’s legislative promiscuity. In reality, it creates a series of wildly ambiguous, generic orders which grant officers of the state and private sector even greater powers to issue tougher sentences, with fewer checks and balances to protect citizens.

The Bill introduces Injunctions to Prevent Nuisance and Annoyance (IPNAS) to replace ABSO’S. Almost no one will be sad to say goodbye to ASBO’s. The orders, designed to allow police to tackle anti-social behaviour, simply became a means of criminalising youthful indiscretion – and eventually a means of criminalising anything people found annoying. Some of the bizarre abuses of this power include:

- Stuart Hunt of Loch Ness brought to court 100 times since 2007 for breaching an ASBO preventing him from laughing, staring or slow hand clapping.

- Homeless, alcoholic and mentally ill Michael Gilligan given a 99 year ASBO rather than the welfare support that might have made a difference

- An 87 year old man was given an ASBO threatening a prison sentence if he was sarcastic to his neighbours.

Read the full article at: scriptonitedaily.com