The Evil Doers: A Children’s Book about Terror 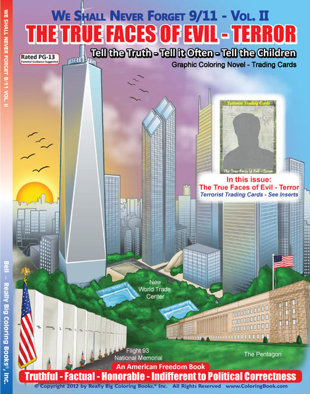 It would seem that even more than a decade after the terrible events of 9/11, the tragedy is still being used by those who want to effect political or societal change, instill fear, or make money.

Eleven years after the events of September 11, a printing company has published what they’ve called a coloring book about terrorism, "for kids".

It’s called "We Shall never Forget 9/11, Volume II: The True Faces of Evil-Terror" and, among the black-and-white outlines of memorials and military men, it features collectible trading cards with photos and information about terrorists around the world.

"A lot of people seem to think that there’s a disconnect with the public in general when it comes to teaching children about terrorism and terrorist activity," Bells adds. "A lot of people want to be politically correct. It’s just really difficult to deal with that subject sometimes."

The trading card idea was inspired by the "Terrorist Attack" collectible cards issued by the Piedmont Candy Company in 1987, and by ones printed in Chicago and New York in 2002, Bell says.

"Why trading cards? It’s kind of interesting," he says. "It’s kind of like when the U.S. government made USA playing cards with terrorists on the playing cards, from the Ace of Spades down to the Deuce of Hearts. It’s just another feature in the book that’s pretty unique in that it explains terrorists and terrorism."

"It’s unique in the fact that we try to name them and shame them, the actual faces of evil," he adds.

This is not the first time Wayne Bell has been called out for his publications.

In 2011 Big Coloring Books published "We Shall Never Forget 9/11 "The Kids’ Book of Freedom" Graphic Novel - Coloring Book". It included images of Osama bin Laden being gunned down by a US soldier while a veiled woman stands caught in the crossfire. A caption reads "What happens to a terrorist who orders others to bomb our peace loving wonderful nation?" 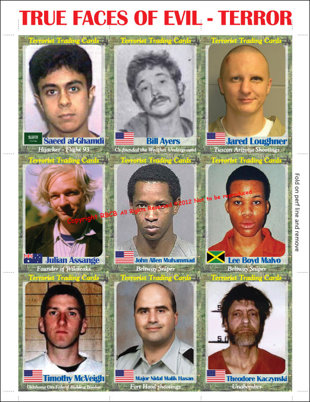 Convicted US criminals ’The Beltway snipers’ John Allen Muhammad and Lee Boyd Malvo are included in the list of terrorists on the new trading cards, as are other such notorious US domestic culprits like Oklahoma City bomber Timothy McVeigh, and Ted Kaczynski, the Unibomber.

Surprisingly, WikiLeak’s Julian Assange is included in the names of international terrorists. It’s a startling accusation considering that Assange has not yet been charged with a crime, let alone arrested, tried, or convicted of terrorism in any country.

The publisher’s printed indictments walk the fine line between the right of free speech and misrepresentation or libel, but they also raise the issue of the branding of any crime or even political activities as acts of terrorism.

In the present-day underlying culture of fear and paranoia, it’s not uncommon for the mainstream media to report a crime as a ’terrorist act’ until the facts of the case become clear. Neither is it strange now for the police or security agencies to publicly label an incident ’domestic terrorism’, only to reverse the pronouncement hours later. The definition of terrorism is becoming more and more nebulous, and is being used in wider scope.

"Terrorism" has almost become the default position for any violent event prior (or even during) an investigation. The TSA and other international airport security firms are trained to assume that travelers could be potential terrorists, and the flying public feels this accusation every time they need to be patted down, searched, body scanned, or questioned.

The trading cards in this coloring book are meant to "name and shame" the terrorists, but some suggest that a better option would have been to focus on the heroes, the champions, and those who have been brave in the face of danger - be they political activists, humanitarians, scientists, spiritual leaders, and more.

Still others suggest that the ’shameful’ aspect of the cards is not necessarily in the faces of these men convicted of terrible crimes, but instead in the idea that these cards may be circulating in the hands of children, actually diminishing the horror of the events,which are ultimately being used to make money for the publishing company.

People must learn and be aware of history, but at what point does the ’teaching’ of history become fear mongering or propaganda?