Dec 12, 2010 Source: rawstory.com
’The Empire’ is ’being threatened by a slingshot in the form of a computer’ 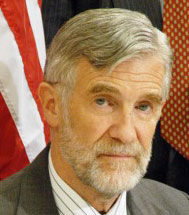 Traditional lines of communication between the people and the press have fallen into such disrepair in America that a whole new approach is necessary to challenge the military-industrial-governmental complex, according to a former CIA analyst sympathetic to WikiLeaks.

McGovern explained that the term the "Fourth Estate," known today as the news media in the US, was first coined by 18th century British statesman Edmund Burke. Burke is said to have pointed to the balcony in Parliament and lauded the print media of his day for being the safeguards of democracy.

"That was very powerful back then," McGovern said. "And just a century later you get Tom Paine, James Madison. You know what Thomas Jefferson said? He said if we have to make a choice between having a government and having a press, I’ll go for the press every time. He understood that any government without a free press will resort to despotism."

McGovern, a CIA analyst for 27 years, whose duties included preparing and briefing the President’s Daily Brief and chairing National Intelligence Estimates, said that he preferred to focus on the First Amendment battle of WikiLeaks’ founder Julian Assange than on the current "cyber war" in which WikiLeaks is embroiled.

McGovern said that modern people can now become informed through what he termed "The Fifth Estate."

"Luckily, there is a Fifth Estate," he said. "The Fifth Estate exists in the ether. It’s not susceptible of government, of corporations, or advertisers or military control. It’s free. That is very dangerous to people who like to make secrets and to make secret operational things. It’s a huge threat. And the Empire – the Goliath here – is being threatened by a slingshot in the form of a computer and a stone through these emissions thrown into the ether to our own computers."

"It’s quite amazing," he added.

"Will the United States and its slavish allies present in Sweden... succeed in making such an object lesson of what happens to an organization and a person – a demonized person – namely Julian Assange? What happens to them if they defy the Empire if they break the rules which they have?" McGovern asked.

He also questioned Attorney General Eric Holder’s handling of the WikiLeaks founder’s case in the wake of habeas corpus being thrown "out the window" by the previous administration. Specifically, he wondered what Holder, the highest law enforcement officer in the US government, meant by the federal government using "other tools" to get Assange and shut down WikiLeaks.

Assange’s attorney said Friday that he expected his client to be indicted by the US.

"The broad hint is the extra-judiciary tools," he said, referring to the news media. "And yet not one of those stenographer correspondents sitting before him there has the guts to say, “What do you mean ‘other tools?’ You going to assassinate the guy?”

McGovern continued, "They’re just letting it hang out there like other stuffed shirts like Jeff Merrell at the Pentagon [who says to the effect,] ’Everything is on the table. We don’t rule anything out.’ Well, you know that reflects the state of the defunct Fourth Estate. That’s precisely why you need people to be able to get out of the framework of the Fourth Estate and to the new."

McGovern also noted the demise of the Fourth Estate, with an anecdote about the 30th anniversary of the Pentagon Papers’ release in June 2001, months before the 9/11 attacks.

He said that at the reunion, most of those in attendance did not believe the press would publish such information were it made available today.

He continued, "The amazing thing was that these people still had a lot of self-identification with these newspapers – some were still actively employed by them. And not only did they say this, but there was no hint of embarrassment or remorse. It was just the way it is today."

Even while the Fourth Estate may be dead, WikiLeaks learned one important lesson from Daniel Ellsberg’s release of the Pentagon Papers, McGovern admitted. That lesson was to tell the news media that the documents are being given to more than one outlet at the same time.

WikiLeaks addressed that question by making sure that when they gave documents to the Times, they said The Guardian, Der Spiegal, Le Monde, and El Pais also had them, McGovern said.

"These guys are very, very clever," he said. "As you can see, I wish them all the success in the world."

McGovern said that WikiLeaks’ benefit is that it gives people the chance to become informed and place a check on government. He added that WikiLeaks’ information on the wars is the "ground-truth," in that the data came from the American troops on the ground in Iraq and Afghanistan.

McGovern said that WikiLeaks -- or outlets like it -- has the potential to make the world safer to the degree American people get exposed to this information, draw adult conclusions from it, and pressure the US government to change its policies.

"You have no doubt about the authenticity of what these people are reporting, and it’s a new ballgame once these things become accessible to the American people," he said.