The Great Pyramids of Arizona 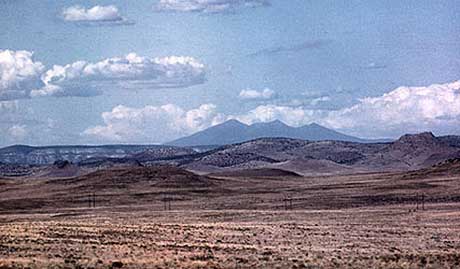 In a recent issue of Archaeology magazine Farouk El-Baz of Boston University suggests that the three major pyramids of the Giza Plateau may have been modeled after the naturally occurring, conical hills found near the Kharga Oasis almost 150 miles west of Luxor. He also notes that the hieroglyph meaning “desert hills” has a pointed shape. 1. 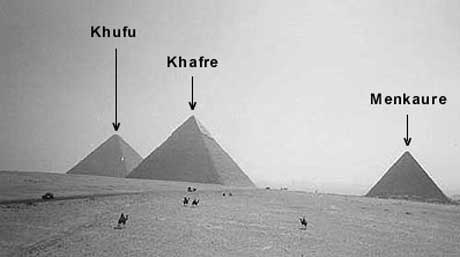 On the other side of the globe on the high desert of American Southwest three great mountains rising out of the San Francisco Peaks eerily echo the Egyptian triad. The basaltic cinder cone of Humphreys Peak (12,633 feet in elevation, the highest point in the Arizona) dominates this arid landscape. The slightly lower Agassiz Peak (12,356 feet) is about a mile and a half due south, while Fremont Peak (11,969 feet) rests a mile further southeast. 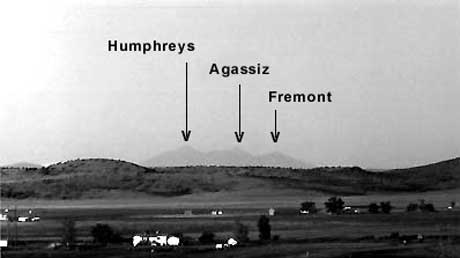 These mountains are the winter home of the Hopi kachinas, intercessory spirits between deities and humans, rather than gods per se. They can take the form of any object or energy in the universe. Shortly after the winter solstice these divine beings travel to the three Hopi Mesas about 70 miles to the northeast. There they assist in the germination and growth of corn, squash, beans and other crops during the spring and early summer.

From late April until July Hopi men don kachina masks, not to impersonate these spiritual helpers but to actually become them. Dancing from dawn until dusk in the village plaza under the brutal desert sun, they coax moisture from the few clouds drifting overhead. Then upon the arrival of the monsoons in mid to late July, the kachinas return to their mountain habitat for the remainder of the year. (See my brief essay about the Hopi Star Kachina: http://www.theorionzone.com/star_kachina.htm.)

The relationship between the Egyptian desert hills and the three monumental pyramids may be similar to that between the volcanic mountains of Arizona and the three major Mesas where the Hopi settled about 900 years ago. Although the Mesas are natural landforms rather than human-made structures, the villages built atop them in effect sanctify the surrounding geography.

The center of the Hopi universe, called Tuuwanasavi, is comprised of the First Mesa, Second Mesa, and Third Mesa. Like the Giza pyramids, this area corresponds to the three stars in the belt of Orion, which is the visual focus and spiritual heart of the constellation. (See my overview article: http://www.grahamhancock.com/forum/DavidGA1.php.) The Mesas function as natural ziggurats, lifting the supplicant even closer to the celestial forces that must be appeased in order to gain the blessing of rainfall.

Scholar Vincent Scully explains the cultural significance of these landforms.

“Once we see the mesas as more than simply man-chosen but almost literally man-constructed --at the very least, man-finished, as the Hopi see them-- their true scale in Hopi culture opens to our understanding. We remember moreover that there is no semantic distinction for the Hopi between the works of nature and those of mankind. Hence the collaboration of the mesas is between commensurable beings. The Hopi are one with the rock.” 2. 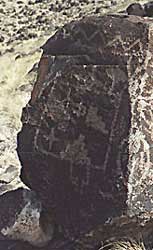 For the Hopi the choosing and finishing of the Mesas is tantamount to the construction of the true pyramids of Egypt or the stepped pyramids of Mesoamerica. 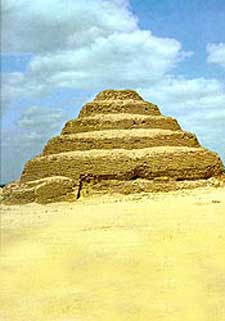 The souls of the pharaohs took flight from their pyramids to the stars in the same way that the otherworldly kachinas soar upon terraced storm clouds. The Hopi word aatsava means “between” and the related word atsva means “above” or “on top,” thereby stressing the verticality of the mesa/pyramid. Incidentally, the primary Egyptian example of the stepped pyramid is found at Saqqara. The Hopi word saaqa means “ladder” or “stepladder.”

In both the Egyptian and the Hopi cultures, pyramids have an avian association. The Bennu bird, also known as the phoenix, was sometimes depicted as a gray heron perched atop a pyramid or obelisk. Periodically regenerated from its ashes, this sacred fowl is a primary symbol of eternal life.

The Bennu was even instrumental in the creation of the cosmos. The Shu Texts describes “...that breath of life which emerged from the throat of the Benu Bird, the son of Rê in whom Atum appeared in the primeval nought, infinity, darkness and nowhere.” 4. Rising from the primordial abyss, the hikê (life-breath) is carried in the beak of the sacred bird of rebirth. It is perhaps more than a coincidence that the Hopi word hik’si echoes the Egyptian word hikê both phonetically and semantically.

The powerful image of a bird perched on the apex of a pyramid also appears on a Hopi artifact. In the early twentieth century near the present town of Winslow, Arizona the renowned archaeologist Jesse Walter Fewkes unearthed a stone slab covering a grave at Chevelon Ruin. 5.

On one side of the painted slab a white rectangular border with black on the outside encloses three isosceles triangles or pyramids of nearly equal size. On a yellow background each of these black pyramids contains a white square located near the base. A red bird, perhaps a macaw or parrot, is perched atop all three of these pyramids. Each of the stylized birds has a triangular body, the base of which forms its dorsal side. The body’s apex (where its feet would be) touches each pyramid’s apex. Only the bird at the center has eyes. Facing to the right, they all have bifurcated tails and curving beaks. 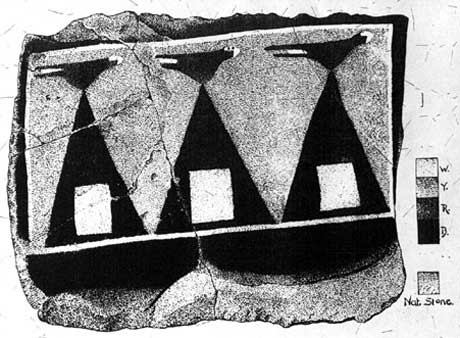 What is the meaning of these figures? Fewkes suggests that the triangles are simply rain clouds. The white square at the heart of each pyramid signifies inner space, perhaps an Underworld of sorts. The three pyramids possibly designate the three major promontories in the San Francisco Peaks as well as the three Hopi Mesas.

The exotic parrot or scarlet macaw represents the moisture of the tropical jungles far to the southeast, the direction symbolically implied by their redness. This is also the region of the Mayan stepped pyramids. Used in prayer stick making and other ceremonies, the multi-hued feathers of these birds may symbolize the nadir, the Underworld direction of “many colors.” 7. Whole bodies of both parrots and macaws have been found in burial sites throughout the Southwest.

Fewkes also discovered other grave slabs at Chevelon with circular holes worn into them, ranging in size from a broomstick to an arm’s width. Somewhat condescending vis-à-vis the modern Hopi, he remarks on their purpose: “Explanations more or less fanciful have been suggested for these perforated stones, one of which was that the rock had been placed above the body and the hole in it was for the escape of the soul or breath-body.” 8. Given this evidence, the three birds atop their pyramids in Arizona most likely performed same function as the journeying soul of the Bennu in Egypt did-- the omnipresent quest for immortality.

The Bennu iconography is also associated with the Benben, a black conical stone, possibly meteoric, used as a pyramidion, or apex of a pyramid. The Egyptian word ben denotes both the nominative “seed” or “semen” and the infinitive “to copulate” or “to impregnate”-- all particularly apropos of the phallic obelisk. 9.

In addition, the cognate ben-t means “cincture, belt, girdle,” 10. and might refer obliquely to Orion’s belt. Alnitak, the most eastern star of the belt, literally means “the Girdle.” It corresponds to the Great Pyramid, or Khufu, in Egypt and First Mesa in Arizona. Mintaka, the most western star, is called “the Belt.” 11. It corresponds to the small Menkaure pyramid in Egypt and Third Mesa in Arizona.

As with every truly divine omnipotence, the positive aspects are counter-balanced with the negative. Hence the word ben also means “evil, wickedness,” and the words ben-t or benut can also refer to “pustule, boil, abscess, or pus” 12. --all of which are attributes of the Hopi god of the Underworld and death, Masau’u. No “b” sound exists in the Hopi language, but the related word poengoe means “boil” or “abscess.”

Whether or not the pyramid shaped hills of the Sahara served as models for the massive structures at Giza is still debated. Because the winter and summer homes of the kachinas are the San Francisco Peaks and the Hopi Mesas respectively, this tribe most likely acknowledged the relationship between the three natural mountains and the three ceremonialized Mesas. Similarly, these Mesas reflect the three belt stars of Orion.

Correlations abound, both on earth and in heaven. To live between the two realms upon this vast desert is to feel deep in one’s bones the hermetic maxim “As above, so below.”

Gary A. David is an independent researcher and writer living in northern Arizona. The Orion Zone: Ancient Star Cities of the American Southwest was published by Adventures Unlimited Press in late 2006. This book discusses an Orion correlation of Hopi villages and ancient pueblo ruins in the Four Corners region of the US. His articles have appeared in Ancient American, Atlantis Rising, Fate, and World Explorer magazines.