"Green guru James Lovelock was right. He warned last week that “the green religion is now taking over from the Christian religion.”

"’I don’t think people have noticed that, but it’s got all the sort of terms that religions use. The greens use guilt. You can’t win people round by saying they are guilty for putting CO2 in the air"

Now at the U.N. Earth Summit, even the image of Christ has been made a forcible convert to the eco-faith, as the city of Rio is bathing the iconic statue of Christ the Redeemer (Christo Redentor) in green light." 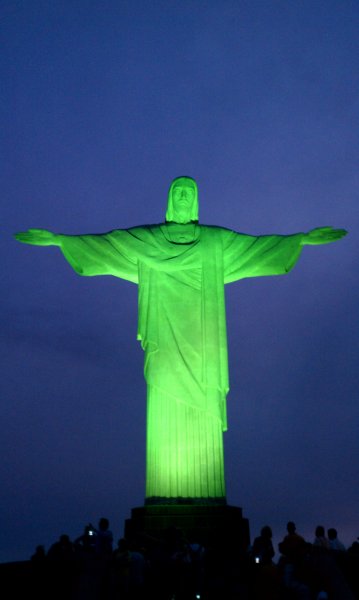 They highlight how Jesus is signifying a shift to a ’green religion’, and that perhaps even obligations such as recycling, paying carbon taxes, or living with smart meters could be seen as "religious duties of the faithful".

The left-wing National Religious Partnership for the Environment has been working for years in the U.S. to make green tenets a staple of religious life in America. A bizarre eco-version of the Ark of the Covenant is making its way around the globe. And a “Green Bible” is now available at your local Christian bookstore.

Other symbols at Rio this year are the fish constructed from plastic bottles: 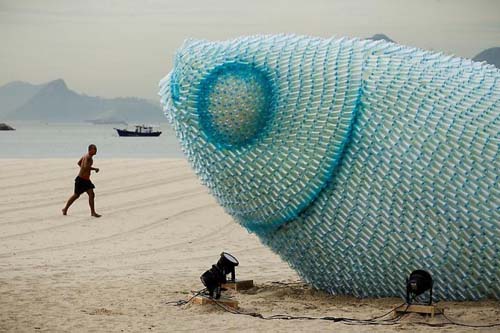 "As part of the UN Conference on Sustainable Development (Rio+20) an enormous outdoor installation of fish was constructed using discarded plastic bottles on Botafogo beach in Rio de Janeiro, Brazil. The sculptures are illuminated from the inside at night" Source 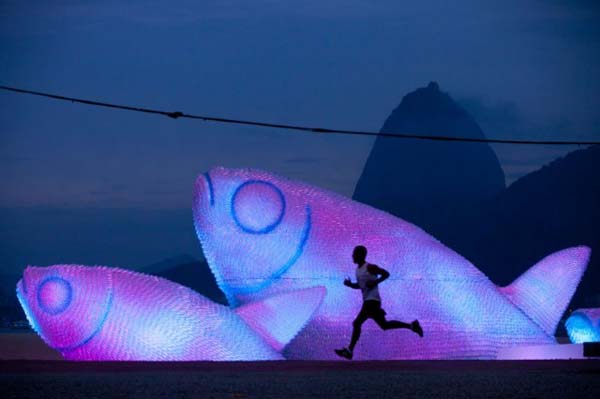 Though the sculptures capture the imagination (and remind us that there’s a tragic amount of plastics in the ocean), fish symbolism is emblematic to the Christian religion. "The fish’s first known use as a Christian religious symbol was sometime within the first three centuries AD. Christians began using the Greek word for "fish" as an anagram/acronym for "Jesus Christ God’s Son, Savior." (Source) 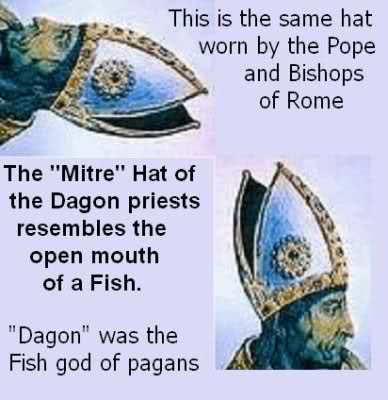 Is all this ecclesiastical symbolism at an eco summit indicative of a shift towards religious dogma? If so, it encompasses not just modern Christianity, but also ancient beliefs and gods. Some would say the "new age" green religion we are being offered is actually an echo of an old one.
Another aspect of this ’Green Jesus’, is the unavoidable association to Osiris.

Osiris, lord of the dead, god of the afterlife. His green skin symbolizes re-birth. (Source: Wikipedia)

Osiris is an Egyptian god, usually identified as the god of the afterlife, the underworld and the dead. He is classically depicted as a green-skinned man with a pharaoh’s beard, partially mummy-wrapped at the legs, wearing a distinctive crown with two large ostrich feathers at either side, and holding a symbolic crook and flail.

Through the hope of new life after death Osiris began to be associated with the cycles observed in nature, in particular vegetation and the annual flooding of the Nile, through his links with Orion and Sirius at the start of the new year. Osiris was widely worshiped as Lord of the Dead until the suppression of the Egyptian religion during the Christian era. 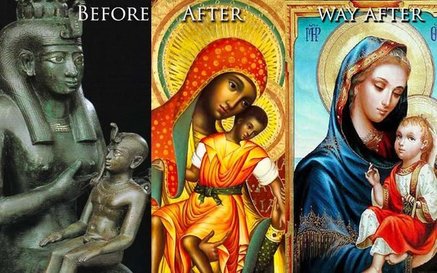 Another aspect of the suggested ’green religion’ that dates back to antiquity is The Green Man. 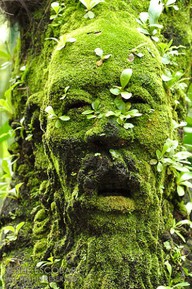 The Green Man motif has many variations. Found in many cultures around the world, the Green Man is often related to natural vegetative deities springing up in different cultures throughout the ages. Primarily it is interpreted as a symbol of rebirth, or "renaissance," representing the cycle of growth each spring.

The Green Man would appear to be pagan, perhaps a fertility figure or a nature spirit, similar to the woodwose (the wild man of the woods), and yet he frequently appears, carved in wood or stone, in churches, chapels, abbeys and cathedrals, where examples can be found dating through to the 20th century. The earliest example of a green man disgorging vegetation from his mouth is from St. Abre, in St. Hilaire-le-grand, c 400 AD.

To the modern observer the earlier (Romanesque and medieval) carvings often have an unnervingly eerie or numinous quality. This is sometimes said to indicate the vitality of the Green Man, who was able to survive as a symbol of pre-Christian traditions despite, and at the same time complementary to, the influence of Christianity: rather than alienate their new converts, early Christian missionaries would often adopt and adapt local gods, sometimes turning them into saints.
(Source, Wikipedia) 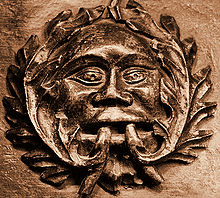 Detail of a "disgorging" medieval misericord in Ludlow parish church

Is there a push to create a new religion from old ideas, marrying devotion to god(s) with adherence to the ideals of an environmental movement?
If so, who does this benefit most of all?
Will these movements actually improve conditions in our environment, or (as too often in religion) will these crusades simply line the pockets of the influential and powerful?

Either way, Jesus in Rio looks a bit queasy at the goings-on. 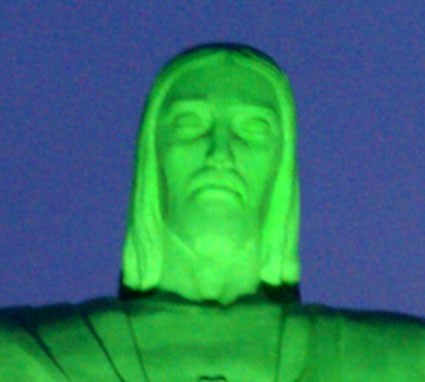 For more information on the ’Green Religion’, environmental extremism, and the Rio +20 Summit, tune into Red Ice Radio: