The Monster of European Law - Just how big is the Acquis Communautaire? 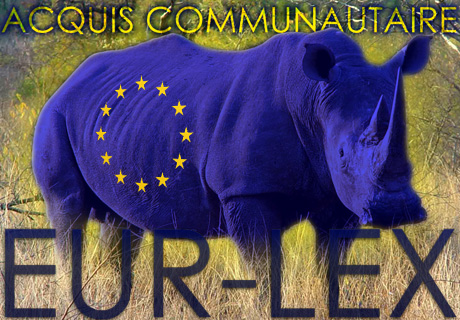 The weight of the Acquis Communautaire - the body of EU legislation is over a tonne – equivalent to the size of a small whale or rhinoceros. The total weight of the parts of the Official Journal that are currently in force is 285 kg.

Politicians have asserted for years that the EU’s acquis communautaire the body of EU legislation which European companies, charities and individuals have to comply with - is roughly 80,000 pages long.

• However, new research by Open Europe suggests that such estimates are seriously out of date. A huge increase in the burden of EU regulation over the last ten years is now visible even in the physical volume of EU legislation.

• By totalling up pages in the many volumes of the EU’s Official Journal of legislation we found that the EU has passed a staggering 666,879 pages of law since its inception in 1957.

• From the EU’s legislative database – Eur-lex – we were able to ascertain that 26% of all EU regulations passed since 1957 are still active. Thus we calculate that the true size of the active acquis communautaire is over 170,000 pages long. This is more than double the number of pages that is normally claimed by the EU Commission and other commentators.

• Of these 170,000, over 100,000 have been produced in the last ten years. This rapid expansion shows no sign of abating. If the EU continues to legislate at current trends the acquis communautaire will have more than doubled by 2020 to 351,000 pages.

• If all the legislation the EU has passed were laid out lengthways it would be over 120 miles long. Along the M1 it would stretch from London all the way past Nottingham. Even if we just account for the amount of EU legislation currently in force, at 31.7 miles it stretches even further than a marathon and would take the average person more than four hours to run along.

• The total amount of legislation passed since the start of the EU would be nearly as tall as Nelson’s column – 43.8 metres to Nelson’s 46m. Even if you were to stack just the 170,000 pages of currently active legislation on top of each other they would reach over 11 metres (36 feet) tall – over twice the height of one of London’s old Routemaster double-decker buses, which stood at 4.3 metres (over 29 feet) tall.

Previous estimates
Timothy Garton-Ash has complained about “the bureaucratic rigidity and the gigantism of the 80,000 pages of acquis communautaire”
-Timothy Garton-Ash, Le Monde 27 Sept 2000

“the acquis covers 80,000 pages - pages, not words - in the English edition and more in the German one. Most of them refer to that inspiring topic, the Common Agricultural Policy”

-Samuel Brittan, Financial Times, 26 April 2001
“Unification of the European continent will not be achieved in a day. But the process is going well. We have to realise that these countries have had a double transition – both political and economic. They have had to absorb more than 80,000 pages of directives and regulations which make up the acquis communautaire.”

-Noëlle Lenoir, French Europe Minister, La Croix, 22 September 2003
In a press release the EU Commission said that the acquis communautaire “represents 83 000 pages of Community legislation”
EU Commission, Press Release, 5 May 2004 “We cannot sum Europe up as just a bureaucracy, guardian of the 80,000 pages of the acquis communautaire. It is much more than that” Mark Leonard, Centre for European Reform, Le Temps, 15 December 2005

Burden of EU regulation
The EU’s failure to tackle its ever expanding reams of legislation is not just a technical point – it has very real implications for the European economy. EU Industry Commissioner Gunter Verheugen told the FT in October last year that EU legislation now costs European business €600 billon (£405 billion) a year, on the basis of a new evaluation of the administrative costs of red tape. This figure is almost twice the previous estimate of €320bn, and represents 5.5% of total EU GDP. This is the equivalent of the EU losing the entire output of a medium-sized
country like Holland every year.

Back in 2004 Peter Mandelson told the CBI conference that the cost of regulation amounted to about 4% of Europe’s GDP, or around double the benefit from the single market. Unsurprisingly, European businesses are beginning to get restless. A poll of 1,000 British Chief Executives by ICM in October 2006 found that a majority felt that the costs of EU regulation now outweighed the benefits that the EU’s single market provided for their company. This was the same even among businesses that traded heavily with Europe. 51% of businesses that categorised themselves as doing “a lot" of trade with the EU said that the costs of the single market outweigh the benefits while 43% thought there has been a net benefit.

While the EU is not solely to blame for the over regulation of the British economy it is certainly the main culprit. A recent study by Open Europe found that half of regulations which have imposed a cost on business originated in the EU. But, more importantly, it also found that the burden imposed by EU regulation is greater: 77% of the cost of regulation on UK business since 1998 has been driven by EU legislation. Three of the regulations studied have cost business over £5 billion each year since 1998; all three came from the EU. The EU is responsible for four of the five most costly regulations on UK businesses. The total cost of these EU regulations to the UK’s economy was over £30 billion between 1998 and 2005 alone.

Empty promises
In response to this growing criticism the EU Commission has at regular periods announced that it will launch a new “blitz” or “onslaught” on EU over-regulation. Since 2001 the Commission has even taken to setting targets for the number of pages it wants to reduce the EU’s Official Journal by.

In July 2001, then Commission President Romano Prodi told the FT that the acquis communautaire “is 80,000 pages long. It is far too much. The Commission has to significantly reduce the number of pages”. He was however unsure of how to achieve this. One Commission official challenged him – “The ideal is one thing. The method is another. I just don't know how we could tackle this issue without actually going through articles or paragraphs to make them shorter. Would that mean negotiating them?” The paper reports that “Mr Prodi did not have the answer to that”. (Financial Times, 26 July 2001) The EU announced a few days later that it intended to reduce the acquis “by between 30,000 and 35,000 pages.” (EU Commission press release, 30 July, 2001)

Two years later, at the beginning of another deregulation drive a Commission official told the FT “We think we can cut the law book by at least 25,000 pages by 2005. This is about delivering on our promise to make the EU more understandable.” (Financial Times, 10 February 2003)

The next day the Commission issued a press release which said that reducing the size of the EU’s Official Journal was “a key part of the objective set at the Lisbon summit in 2000 of making the EU the world's most competitive knowledge-based economy by 2010.” (February 11 2003, EU Press Release)

More recently, in 2005 EU Industry Commissioner Gunter Verheugen was repeating the same promises. He told the IHT that he would slim down the EU’s Official Journal from 80,000 down to 50,000 pages. He boasted, “We expect a major psychological effect”. (International Herald Tribune, September 24, 2005)

Ever faster expansion
Unfortunately, they have struggled to make any impact. Rather than managing to slash the size of the acquis communautaire the EU Commission has allowed it to expand at an alarming rate.

Since 1957 the EU has churned out more than 170,000 pages of red tape. Of these 100,000 have been produced in the last ten years and this rapid expansion shows no sign of abating. If the EU continues to legislate at the current rate, the acquis communautaire will have more than doubled by 2020 to 351,000 pages. 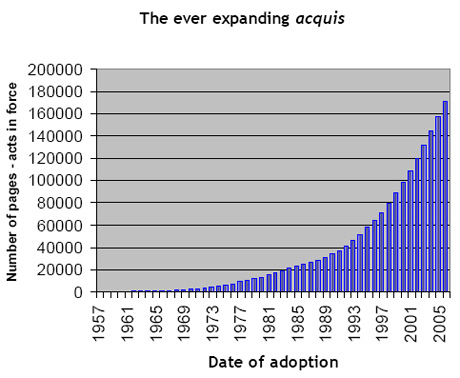 If you were to stack the 170,000 pages of acquis on top of each other they would reach over 11 metres tall – bigger than one of London’s old Routemaster doubledecker buses which stood at 9 metres tall. If we include the parts of the acquis which have now gone out of force the mound of paper would be nearly as tall as Nelson’s column – 43.8 metres to Nelson’s 46m. The weight of the entire Official Journal is over a tonne – equivalent to the size of a small whale or rhinoceros. The total weight of the parts of the Official Journal that are still in force is 285 kg.

Different languages
Obviously the acquis also differs in size according to which language it is translated into. The Spanish have to cope with the largest amount of EU red tape at 180,000 pages – compared to the Slovenes who have the least at just over 142,000 pages.