The most mystifying things the Tsarnaev brothers did 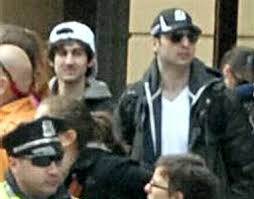 On Monday, it became official: Dzhokhar Tsarnaev was charged with "use of a weapon of mass destruction" and "malicious destruction of property resulting in death" for his alleged role in last Monday’s bombing of the Boston marathon. The federal criminal complaint comes three days after police captured Tsarnaev in a boat in Watertown, Massachusetts, and four days after a manhunt for these specific suspects began in earnest. For the time being, law enforcement officials believe Dzhokhar and his older brother, Tamerlan, who was killed Friday, acted alone.
Dzhokhar and Tamerlan’s motive—or motives—is still unclear. But that’s not the only unknown. Many of the Tsarnaevs’ actions last week seem baffling in retrospect. Here are some of the most confounding things they did:

1. Wear a backwards hat and no sunglasses. Unlike his older brother, Dzhokhar made little effort to prevent cameras from capturing his face, making him easier to identify when the FBI released security camera photos on Thursday. Indeed, classmates at University of Massachusetts–Dartmouth did see him in the photos, but dismissed the similarity because it seemed so far-fetched.

2. Not react to the explosions. For three days, investigators pored over all available photos and surveillance videos of the blast area searching for abnormal reactions. The complaint filed in federal court on Monday specifically cites Dzhokhar’s reaction to the first explosion as a giveaway; per the complaint, he glanced in the direction of the first blast only briefly.

3. Leave the car in the shop. The Wall Street Journal reported that Dzhokhar stopped by an auto-body shop in Watertown on Tuesday to pick up the Mercedes he’d brought in for repairs.

4. Stay in Boston. The second bomb exploded at 2:49 p.m. last Monday. Dzhokhar and Tamerlan carjacked a Mercedes at 10:39 p.m.* on Thursday. What did they do in the interim three days? Go to the gym, check in on their busted car, and, in Dzhokhar’s case, go to a party on the UMass–Dartmouth campus. During the three-day window in which their involvement was unknown, they made no attempt to flee.

5. Kill an MIT police officer. Why did the brothers shoot 26-year-old Sean Collier? The murder at 10:30 p.m. on Thursday set in motion the events that would ultimately lead to their capture.

6. Run out of cash. When Dzhokhar carjacked a Mercedes on Thursday night, he and his brother had one thing in mind: Get cash, and fast. They emptied $800 from an ATM using their victim’s PIN number, before they reached the account limit. Holding up a stranger for money suggests a woeful lack of planning on their part (they hadn’t budgeted) that helped alert them to the authorities.

7. Not understand how ATMs work. After reaching the daily withdrawal limit at one ATM, the Tsarnaevs, apparently not realizing that the machines are part of an interconnected system, decided to try their luck at two different machines. The quest to find a working ATM was how they ended up, coincidentally, at a 7/11 in Cambridge around the same time it was the scene of an armed robbery, and were spotted on the store security camera.

Read the full article at: refreshingnews99.blogspot