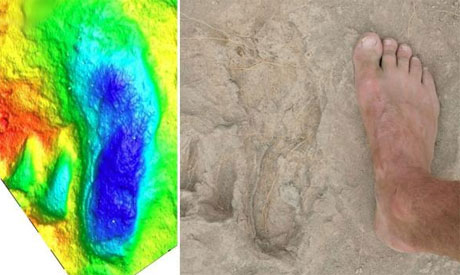 Ancient footprints found at Rutgers' Koobi Fora Field School show that some of the earliest humans walked like us and did so on anatomically modern feet 1.5 million years ago.

The footprints were discovered in two 1.5 million-year-old sedimentary layers near Ileret in northern Kenya. These rarest of impressions yielded information about soft tissue form and structure not normally accessible in fossilized bones. The Ileret footprints constitute the oldest evidence of an essentially modern human-like foot anatomy.

Foot bones are rarely preserved because they are small, encased in flesh, and easily consumed by carnivores. Consequently, our knowledge of foot anatomy and function in early hominins is poor.

To ensure that comparisons made with modern human and other fossil hominid footprints were objective, the Ileret footprints were scanned and digitized by the lead author, Professor Matthew Bennett of Bournemouth University in the United Kingdom.

Published as the cover story in the Feb. 27 issue of the journal Science, the anatomical interpretation is the conclusion of Rutgers Professor John W.K. Harris* and an international team of colleagues.

The authors of the Science paper reported that the upper sediment layer contained three footprint trails: two trails of two prints each, one of seven prints and a number of isolated prints. Five meters deeper, the other sediment surface preserved one trail of two prints and a single isolated smaller print, probably from a juvenile.

In these specimens, the big toe is parallel to the other toes, unlike that of apes where it is separated in a grasping configuration useful in the trees. The footprints show a pronounced human-like arch and short toes, typically associated with an upright bipedal stance. The size, spacing and depth of the impressions were the basis of estimates of weight, stride and gait, all found to be within the range of modern humans.

Based on size of the footprints and their modern anatomical characteristics, the authors attribute the prints to the hominid Homo ergaster, or early Homo erectus as it is more generally known. This was the first hominid to have had the same body proportions (longer legs and shorter arms) as modern Homo sapiens. Various H. ergaster or H. erectus remains have been found in Tanzania, Ethiopia, Kenya and South Africa, with dates consistent with the Ileret footprints.

Other hominid fossil footprints dating to 3.6 million years ago had been discovered in 1978 by Mary Leakey at Laetoli, Tanzania. These are attributed to the less advanced Australopithecus afarensis, a possible ancestral hominid. The smaller, older Laetoli prints show indications of upright bipedal posture but possess a shallower arch and a more ape-like, divergent big toe.

Based on the size and the stride pattern of these newly discovered footprints, the team determined that the individuals responsible would have been approximately 1.75 meters (about 5'9") in height.

*Harris is a professor of anthropology at Rutgers, The State University of New Jersey, member of the Center for Human Evolutionary Studies and director of the Koobi Fora Field Project. Harris is also director of the field school which Rutgers University operates in collaboration with the National Museums of Kenya. From 2006 to 2008, the field school group of mostly American undergraduates, including Rutgers students, excavated the site yielding the footprints.