The Nine Sacred Herbs of the Anglo-Saxons

Jul 3, 2012 Source: suite101.com
The Anglo-Saxons believed that nine herbs had special powers against illness and evil 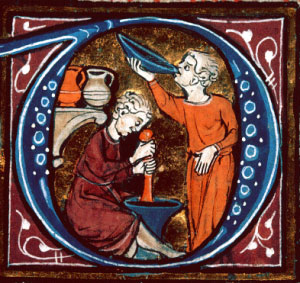 " A worm came crawling and tore a man asunder. Then took Woden nine magic twigs and smote the serpent that he in nine pieces dispersed. Now these nine herbs have power.........
This text from the Lacnunga, a tenth century Anglo-Saxon herbal, provides a myth to explain the origin of the nine sacred herbs. Worm is Anglo-Saxon for dragon, and Woden, the sorceror god, is now better known by his Norse designation, Odin.

The Lacnunga is a collection of nearly two hundred herbs used by the Anglo-Saxons and kept now at the British Library in London. Whoever compiled it gathered material from a wide range of sources, mostly Anglo-Saxon, hence it is not a systematic account, but more of an anthology. One of its contents is the Nine Herb Charm, a quote from which is given above.

The Anglo-Saxons thought that diseases were spread on the air as the wind blew poisons around. In a pre-scientific age when viruses were unknown this was a reasonable idea that gets to grip with the fact that some disease is spread by air. However, they entrusted healing to herbs and charms. Herbs would be applied with the appropriate incantations to attempt to heal the patient.

Mugwort: [Artemisia vulgaris] This is the first of the nine. Its name derives from the fact that it as a wort [plant] that was used as an ale flavouring, hence it flavoured your mugs. It continued as an ale flavouring right into the Middle Ages, and as healers used to administer herbs in alcohol, mugwort-flavored ale would be a popular medicine. It was believed that pillows stuffed with Artemisia would grant good dreams, and that if applied as an infusion in bath water it would restore vigour. It gave stamina to last on long journeys.

Read the full article at: suite101.com