The Trappings of Modern Art - Guy Gets Stuck in Vulva

---
It’s a boy! US exchange student rescued from giant stone vagina in Germany 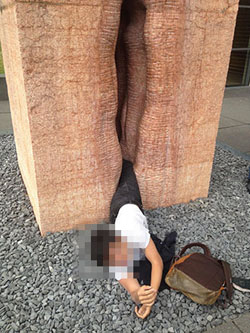 The German fire services had to be called out in force to rescue a US exchange student from a giant marble vagina, located in a southwestern university town, after he crawled inside for a dare.

On Friday afternoon, the Tübingen firefighters received the emergency call: ’A person is trapped in a stone-vulva!’ Twenty-two firefighters and a grand total of five vehicles had to rush to his aid to pull him out of the 120,000-euro sculpture, reported Schwäbisches Tagblatt.

The rescue was successfully undertaken, namely “by hand and without the use of equipment” – presumably forceps.

The student had apparently climbed in for a dare, according to local reports. One, likely very unreliable local newspaper declared that: “the young man felt the sculpture of the female vagina to be so attractive that he literally disappeared into it”.

However, others suggested it was merely a photo opportunity. “I was there!!! He just wanted to take a funny picture“ imgur user Erick Guzman wrote. “The fire department was not really amused, and he was really embarrassed,” he added.