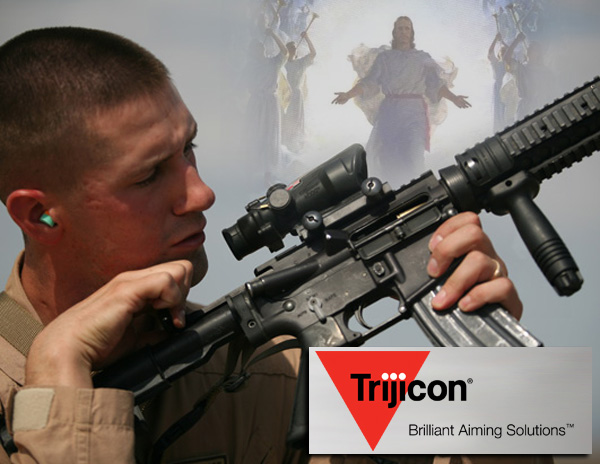 The ACOG is the first standard issue scope for the United States Marine Corps (USMC). In this photo, a USMC sergeant holds up an M-4 service rifle equipped with the ACOG during a training exercise at the Marine Corps Air Ground Combat Center at Twentynine Palms, Calif. (defenseimagery.mil) More Images

Coded references to New Testament Bible passages about Jesus Christ are inscribed on high-powered rifle sights provided to the United States military by a Michigan company, an ABC News investigation has found.

The sights are used by U.S. troops in Iraq and Afghanistan and in the training of Iraqi and Afghan soldiers. The maker of the sights, Trijicon, has a $660 million multi-year contract to provide up to 800,000 sights to the Marine Corps, and additional contracts to provide sights to the U.S. Army.

U.S. military rules specifically prohibit the proselytizing of any religion in Iraq or Afghanistan and were drawn up in order to prevent criticism that the U.S. was embarked on a religious "Crusade" in its war against al Qaeda and Iraqi insurgents.

One of the citations on the gun sights, 2COR4:6, is an apparent reference to Second Corinthians 4:6 of the New Testament, which reads: "For God, who commanded the light to shine out of darkness, hath shined in our hearts, to give the light of the knowledge of the glory of God in the face of Jesus Christ."

Other references include citations from the books of Revelation, Matthew and John dealing with Jesus as "the light of the world." John 8:12, referred to on the gun sights as JN8:12, reads, "Whoever follows me will never walk in darkness, but will have the light of life." 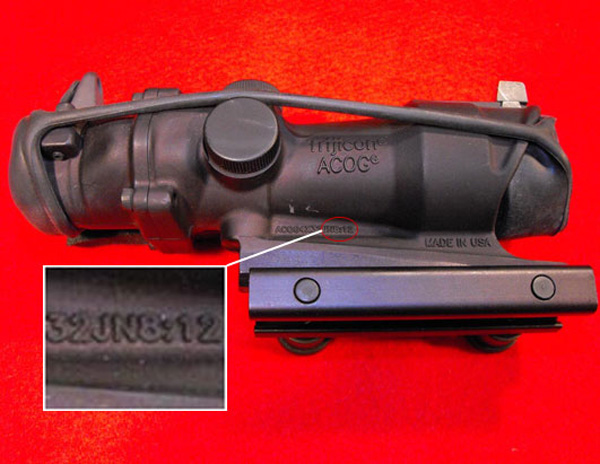 In August of 2005 Trijicon was awarded a $660 million dollar, multi-year contract to provide up to 800,000 of its Advanced Combat Optical Gunsight (ACOG) to the U.S. Marine Corps. According to Trijicon, the ACOG is "designed to function in bright light, low light or no light conditions," and is "ideal for combat due to its high degree of discrimination, even among multiple moving targets." At the end of the scope's model number, you can read "JN8:12", which is a reference to the New Testament book of John, Chapter 8, Verse 12, which reads: "Then spake Jesus again unto them, saying, I am the light of the world: he that followeth me shall not walk in darkness, but shall have the light of life." (King James Version) (ABC News) More Images

Trijicon confirmed to ABCNews.com that it adds the biblical codes to the sights sold to the U.S. military. Tom Munson, director of sales and marketing for Trijicon, which is based in Wixom, Michigan, said the inscriptions "have always been there" and said there was nothing wrong or illegal with adding them. Munson said the issue was being raised by a group that is "not Christian." The company has said the practice began under its founder, Glyn Bindon, a devout Christian from South Africa who was killed in a 2003 plane crash.

'It violates the Constitution'
The company's vision is described on its Web site: "Guided by our values, we endeavor to have our products used wherever precision aiming solutions are required to protect individual freedom."

"We believe that America is great when its people are good," says the Web site. "This goodness has been based on Biblical standards throughout our history, and we will strive to follow those morals."

Spokespeople for the U.S. Army and the Marine Corps both said their services were unaware of the biblical markings. They said officials were discussing what steps, if any, to take in the wake of the ABCNews.com report. It is not known how many Trijicon sights are currently in use by the U.S. military.

The biblical references appear in the same type font and size as the model numbers on the company's Advanced Combat Optical Guides, called the ACOG.

A photo on a Department of Defense Web site shows Iraqi soldiers being trained by U.S. troops with a rifle equipped with the bible-coded sights.

"It's wrong, it violates the Constitution, it violates a number of federal laws," said Michael "Mikey" Weinstein of the Military Religious Freedom Foundation, an advocacy group that seeks to preserve the separation of church and state in the military.

'Firearms of Jesus Christ'
"It allows the Mujahedeen, the Taliban, al Qaeda and the insurrectionists and jihadists to claim they're being shot by Jesus rifles," he said.

Weinstein, an attorney and former Air Force officer, said many members of his group who currently serve in the military have complained about the markings on the sights. He also claims they've told him that commanders have referred to weapons with the sights as "spiritually transformed firearm[s] of Jesus Christ."

He said coded biblical inscriptions play into the hands of "those who are calling this a Crusade."

According to a government contracting watchdog group, fedspending.org, Trijicon had more than $100 million in government contracts in fiscal year 2008. The Michigan company won a $33 million Pentagon contract in July, 2009 for a new machine gun optic, according to Defense Industry Daily. The company's earnings from the U.S. military jumped significantly after 2005, when it won a $660 million long-term contract to supply the Marine Corps with sights.

"This is probably the best example of violation of the separation of church and state in this country," said Weinstein. "It's literally pushing fundamentalist Christianity at the point of a gun against the people that we're fighting. We're emboldening an enemy."