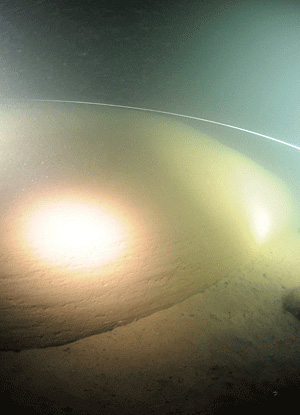 A former Swedish naval oficer and World War II expert Anders Autellus has said that sonar scans suggest that the "UFO" at the bottom of the Baltic Ocean could be part of a World War II Nazi anti-submarine device.

According to Autellus, the object could be the base of a device the Nazis developed as part of the war effort. Autellus said the Nazis built anti-submarine device using wire mesh to confuse submarine radar and lead the enemy craft to crash.

Autellus explains that the "UFO" structure could be an anchor or base of one of the German Nazi military devices for blocking British and Russian submarines in the area.

The Daily Mail reports that Autellus says the steel and concrete structure could be a very important World War II history find. An expert said: "The area was vital to the German war machine because most of the ball bearings for its tanks and trucks came from here. Without them the German army would have ground to a halt. This device dwarfs anything ever found before and is an important weapons discovery."

Autellus said the object was possibly constructed using "double-skinned" concrete which serve as anchor for holding steel wire mesh structures designed to interfere with radar signals. He said that the wire mesh structures might have have eroded away over the years leaving the holes shown on the images provided by the Ocean X team.

Stefan Hogeborn, a professional diver and member of the Ocean X team, agrees with Autellus. He said: "It is a good candidate for the answer to this mystery. The object lies directly underneath a shipping route. It would be of enormous weight in steel and concrete." He notes, however, that the known "Nazi anti-sub anchoring devices were nowhere near as large."

According to Guerrilla Explorer, during World War II, the Nazis were in control of the Baltic Sea. But Soviet submarines would sneak into it from the Gulf of Finland. The Soviets had destroyed more than 20 German ships by 1942. In March 1943, the Nazis installed a 30 nautical mile long anti-submarine net across the Gulf of Finland, using two layers of steel mesh.

Guerrilla Explorer explains that what Autellus is saying is that the circle of the Baltic UFO was an old anchor for one of these nets with the actual net either removed or rusted away. The website says that according to Autellus’s theory, "The strange ’egg shaped’ hole found on the Circle could be an old attachment for the net... Also, the net could’ve caused the tracks... it might’ve dragged along the seabed at one point. Or it might’ve just sank and spread out."

Although Hogeborn thinks Autellus’s theory is credible, Peter Lindberg, a member of the Ocean X team, expressed doubt in an interview, saying that he was 99% certain the "Circle" was a natural formation. He says the anti-submarine anchor theory doesn’t explain the blackened interior of the "Circle," nor does it explain the lack of silt in the area.

Guerilla Explorer also points out that the major difficulty in Autellus’s theory is that the circular anchors the Germans used were very small (see video above, at 0.33) compared with the "Circle" in the Ocean X object which is about 200 feet in diameter

Digital Journal reported that the Ocean X team investigating the underwater object say they have had difficulty conducting a close scrutiny of the object because their electrical equipment stop working when they approach within 200m.

The Daily Mail reports that according to the professional diver Hogeborn, some of the team’s cameras and the team’s satellite phone stop working when they are directly above or close to the object, and start working only after they have sailed away. Hogeborn said: "Anything electric out there - and the satellite phone as well - stopped working when we were above the object. And then we got away about 200 meters and it turned on again, and when we got back over the object it didn’t work."

It is uncertain, however, why an anchor for a wire mesh anti-submarine device should disable electrical equipment.