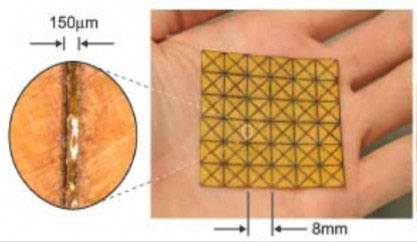 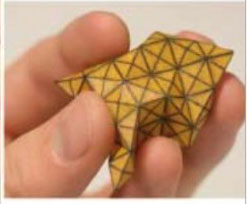 The Defense Advanced Research Projects Agency (DARPA) is developing a technology that will allow future military equipment to change shape on command. Several university teams are working on different approaches to create "programmable matter"—made of individual pieces that can self-assemble into tools or spare parts. One of the approaches being examined uses sheets of self-folding material that can form three-dimensional shapes on command.

Even by the standards of the Pentagon fringe science arm, this project sounds far-out: “” that can be ordered to “self-assemble or alter their shape, perform a function and then disassemble themselves.” But researchers back by Darpa are actually making progress on this incredible goal, Henry Kenyon at Signal magazine reports.

One day, that could lead to “morphing aircraft and ground vehicles, uniforms that can alter themselves to be comfortable in any climate, and ’soft’ robots that flow like mercury through small openings to enter caves and bunker complexes.” A soldier could even reach into a can of unformed goop, and order up a custom-made tool or a “universal spare part.”

One team from Harvard is working on a kind of “generalized Rubik’s Cube” that can fold into all kinds of shapes. Another is trying to order large strands of synthetic DNA to bind together in a “molecular Velcro.” An MIT group is building “’self-folding origami’ machines that use specialized sheets of material with built-in actuators and data. These machines use cutting-edge mathematical theorems to fold themselves into virtually any three-dimensional object.”

The Programmable Matter project is five months into its second phase, which is supposed to wind up early next Spring. When they’re done, the researchers ought to “assemble four or five three-dimensional solids of a specific size and shape from a set of building blocks.”

Intel, which has done a bunch of programmable matter work on its own, is looking beyond those basic steps. Way, way beyond. The malleable stuff could one day “mimic the shape and appearance of a person or object being imaged in real time, and as the originals moved, so would their replicas,” according to their website. “These 3D models would be physical entities, not holograms. You could touch them and interact with them, just as if the originals were in the room with you. ”