US prepares Gitmo for 1000s of Haitians

Jan 21, 2010 Source: news.yahoo.com
The U.S. has begun preparing tents at Guantanamo Bay for Haitians migrants in case of a mass migration spurred by the earthquake, a senior official at the base said Wednesday.

About 100 tents, each capable of holding 10 people, have been erected and authorities have more than 1,000 more on hand in case waves of Haitians leave their homeland and are captured at sea, said Navy Rear Adm. Thomas Copeman.

Authorities have also has tested the latrine facilities and gathered cots and other supplies, said Copeman, the commander of the task force that runs the detention center for terrorism suspects at Guantanamo, where the U.S. holds nearly 200 men. 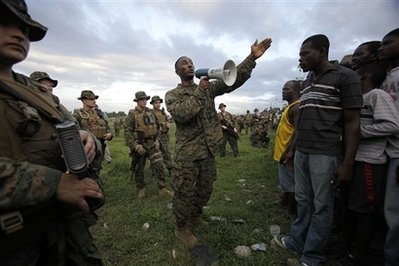 The Haitian migrants would be held on the opposite side of the base as the detention center, separated by some 2 1/2 miles of water across Guantanamo Bay, and would have no contact with the prisoners.
U.S. immigration officials have said they will fast-track applications for a federal designation that will allow illegal Haitian immigrants to live and work temporarily in this country, but only if they were in the U.S. on the day of the Jan. 12 earthquake.

The U.S. base in southeastern Cuba is also being used to transport supplies and personnel to the aid effort in Haiti, about 200 miles away.
In the early 1990s, it housed tens of thousands of Haitian boat people were held at Guantanamo until they could be sent home.