Jan 4, 2010 Source: springfieldnewssun.com
One of five Americans detained in Pakistan on Monday acknowledged their aim to go to Afghanistan to wage holy war against Western forces but defended their plans as justified under Islam.

However, he denied any links to al-Qaida or plans tocarry out terrorist attacks in Pakistan. 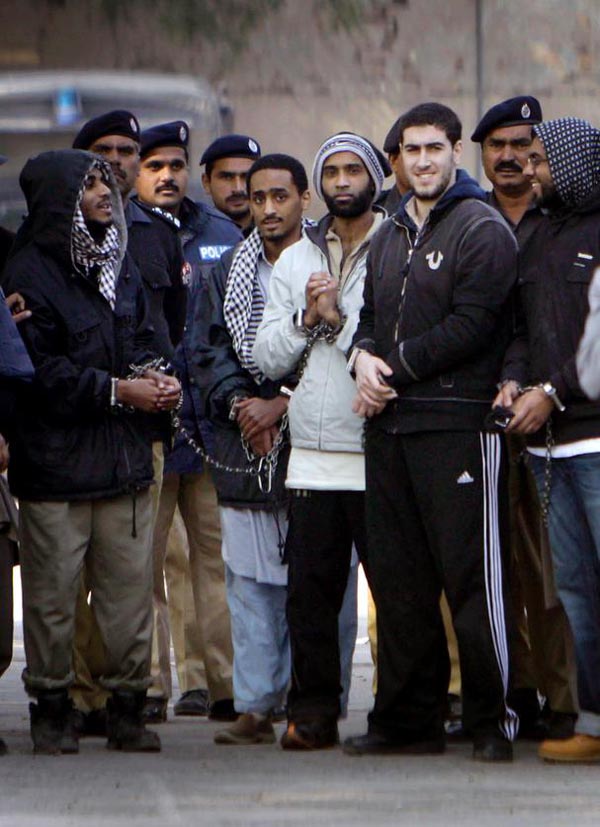 Detained American Muslims look to media as they leave after appear in an anti terrorist court in Sargodha, Pakistan, Monday, Jan. 4, 2010. The defense lawyer for five Americans detained in Pakistan has denied that his clients planned to carry out terrorist attacks inside or outside the country. (AP Photo/K.M. Chaudary)
Monday was the first time the young Muslims from the Washington, D.C., area have addressed a court after being arrested in early December in the eastern Pakistani city of Sargodha. The case has spurred fears that Westerners are traveling to Pakistan to join militant groups. Pakistani police have said they plan to seek life sentences for the men under the country's anti-terrorism law.

"We are not terrorists," one of the men, Ramy Zamzam, told The Associated Press as he entered a courtroom in Sargodha on Monday.

"We are jihadists, and jihad is not terrorism," he said, referring to the word for Islamic holy war.

Zamzam did not elaborate, but some Muslims believe it is their duty to wage jihad against foreign forces they view as occupying a Muslim country.

The men, aged 19 to 25, denied they had ties with al-Qaida or other militant groups during a court appearance Monday in Sargodha, said their attorney, Ameer Abdullah Rokri.

"They told the court that they did not have any plan to carry out any terrorist act inside or outside Pakistan," said Rokri. "They said that they only intended to travel to Afghanistan to help their Muslim brothers who are in trouble, who are bleeding and who are being victimized by Western forces."

The Americans arrived amid tight security. About a dozen police cars escorted the prison van inside the court premises as officers manned the rooftops of surrounding buildings. The men wore handcuffs as they walked into the courthouse for their hearing.

The court remanded the men to prison for 14 days to give police time to prepare their case, said Rokri.

"We have told the court that police have completed their investigation and have enough evidence against the five suspects to try them under anti-terrorism law," said police officer Matiullah Shahani.

Police have not said what the group's intended target was, but authorities say the men had a map of Chashma Barrage — a complex located near nuclear power facilities that includes a water reservoir and other structures. It lies in the populous province of Punjab, about 125 miles (200 kilometers) southwest of the capital, Islamabad.
Pakistan has a nuclear weapons arsenal, but also nuclear power plants for civilian purposes.

The court ordered the release of one of the suspects' fathers, Khalid Farooq, because of a lack of evidence that he had committed any crime, said police officer Tahir Shirazai.

It was unclear if Farooq, also a U.S. citizen, was still in custody since authorities said they had released him more than two weeks ago.
Pakistani police and government officials have made a series of escalating and, at times, seemingly contradictory allegations about the men's intentions, while U.S. officials have been far more cautious. The U.S. is also looking at charging the men — Umar Farooq, Waqar Khan, Ahmed Minni, Aman Hassan Yemer and Ramy Zamzam.

Officials in both countries have said they expect the men to eventually be deported back to the United States, though charging them in Pakistan could delay that process.

The U.S. Embassy has declined to comment on the potential charges the men face in Pakistan.