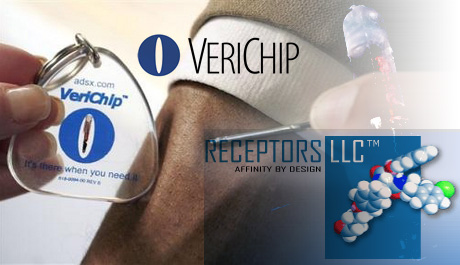 Shares of VeriChip Corp tripled after the company said it had been granted an exclusive license to two patents, which will help it to develop implantable virus detection systems in humans.

The patents, held by VeriChip partner Receptors LLC, relate to biosensors that can detect the H1N1 and other viruses, and biological threats such as methicillin-resistant Staphylococcus aureus, VeriChip said in a statement.

The triage system will provide multiple levels of identification -- the first will identify the agent as virus or non-virus, the second level will classify the virus and alert the user to the presence of pandemic threat viruses and the third level will identify the precise pathogen, VeriChip said in a white paper published May 7, 2009.

Shares of VeriChip were up 186 percent at $3.28 Monday late afternoon trade on Nasdaq. They had touched a year high of $3.43 earlier in the session.

DELRAY BEACH, FL and CHASKA, MN – September 21, 2009 -- VeriChip Corporation (“VeriChip”) (NASDAQ: CHIP) and its development partner RECEPTORS LLC, a technology company whose AFFINITY by DESIGN™ chemistry platform can be applied to the development of selective binding products, announced today that VeriChip has been granted an exclusive license to RECEPTORS' Patent No. 7,504,364 titled “Methods of Making Arrays and Artificial Receptors” and Patent No. 7,469,076 “Sensors Employing Combinatorial Artificial Receptors,” in their application to the development of the virus triage detection system for the H1N1 virus. The patents can also be applied to detection systems for other viruses and biological threats such as Methicillin-resistant Staphylococcus aureus (MRSA).

Last week, VeriChip announced its plans to fund its existing partnership with RECEPTORS to develop the virus triage detection system for the H1N1 virus. The companies have published a white paper entitled, "An Integrated Sensor System for the Detection of Bio-Threats from Pandemics to Emerging Diseases to Bioterrorism," which outlines the system's development and is available at www.verichipcorp.com.

Scott R. Silverman, Chairman and CEO of VeriChip, said, "In a short period of time following our announcement earlier this month that VeriChip has agreed to acquire Steel Vault Corporation (OTCBB: SVUL) and form PositiveID Corporation, we have been intently focused on maximizing our product portfolio and relationships in order to bring identification technologies and tools for consumers and businesses to market. Our strong balance sheet immediately positions us to invest in our partnership with RECEPTORS and we believe that receiving the exclusive license as it relates to this application of the '364 and '076 patents, which are the foundation of the virus triage detection system being developed with RECEPTORS, is a key step in the evolution of PositiveID. "

About RECEPTORS LLC
RECEPTORS LLC is a private company based in Chaska, Minnesota. RECEPTORS' mission is to advance the diagnosis and treatment of disease and to enhance the health, safety, and quality of the global environment through the development and application of artificial receptor products for both research and industry. To achieve this mission, RECEPTORS focuses its individual and collective efforts, its commitment to excellence, and the power of its technology to develop innovative solutions that meet the unique needs of its customers and stakeholders. For further information please visit http://www.receptorsllc.com.

About VeriChip Corporation
VeriChip Corporation, headquartered in Delray Beach, Florida, has developed the VeriMed™ Health Link System for rapidly and accurately identifying people who arrive in an emergency room and are unable to communicate. This system uses the first human-implantable passive RFID microchip and corresponding personal health record, cleared for medical use in October 2004 by the United States Food and Drug Administration.

On September 8, 2009, Steel Vault announced it agreed to be acquired by VeriChip Corporation to form PositiveID Corporation. PositiveID will provide identification technologies and tools to protect consumers and businesses. The companies expect the merger to close in the fourth quarter of 2009.

Statements about VeriChip’s future expectations, including its ability to develop a triage detection system for detection of the H1N1 virus, the ability of the virus triage detection system to help process patient samples, its ability to fund its existing partnership with Receptors, its ability to maximize its product portfolio and relationships in order to bring identification technologies and tools for consumers and businesses to market, the receipt of the exclusive license as it relates to this application of the '364 and '076 patents and its role in the evolution of PositiveID, and all other statements in this press release other than historical facts are “forward-looking statements” within the meaning of Section 27A of the Securities Act of 1933, Section 21E of the Securities Exchange Act of 1934, and as that term is defined in the Private Litigation Reform Act of 1995. Such forward-looking statements involve risks and uncertainties and are subject to change at any time, and VeriChip’s actual results could differ materially from expected results. Additional information about these and other factors that could affect the Company’s business is set forth in the Company’s various filings with the Securities and Exchange Commission, including those set forth in the Company’s 10-K filed on February 12, 2009, under the caption “Risk Factors.” The Company undertakes no obligation to update or release any revisions to these forward-looking statements to reflect events or circumstances after the date of this statement or to reflect the occurrence of unanticipated events, except as required by law.

VeriChip, Steel Vault and their respective directors and executive officers may be deemed to be participants in the solicitation of proxies in connection with the proposed transaction.