Virginia Schools: There's No Such Things As "Boys" Or "Girls" in New Gender Idenity Curriculum 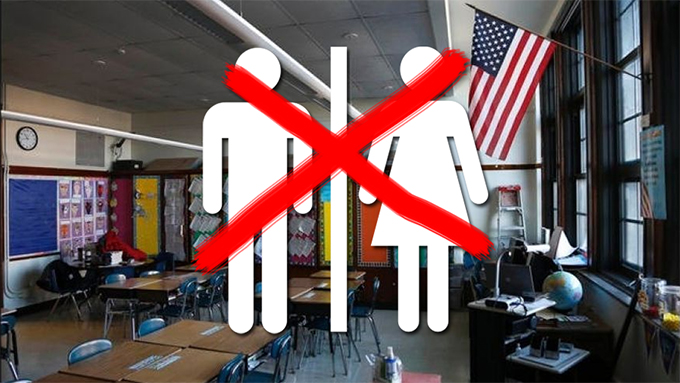 Editor's Note: America, we welcome you to the "progress" that Sweden has been pushing on us for a couple of years now.

One of the nation's largest public school systems is preparing to include gender identity to its classroom curriculum, including lessons on sexual fluidity and spectrum - the idea that there's no such thing as 100 percent boys or 100 percent girls.

Fairfax County Public Schools released a report recommending changes to their family life curriculum for grades 7 through 12. The changes, which critics call radical gender ideology, will be formally introduced next week.

“The larger picture is this is really an attack on nature itself – the created order,” said Peter Sprigg of the Family Research Council.

“Human beings are created male and female. But the current transgender ideology goes way beyond that. They’re telling us you can be both genders, you can be no gender, you can be a gender that you make up for yourself. And we’re supposed to affirm all of it.”

Get a load of what the kids are going to be learning in middle school:

“Students will be provided definitions for sexual orientation terms heterosexuality, homosexuality and bisexuality; and the gender identity term transgender,” the district’s recommendations state. “Emphasis will be placed on recognizing that everyone is experiencing changes and the role of respectful, inclusive language in promoting an environment free of bias and discrimination.”

Eighth graders will be taught that individual identity “occurs over a lifetime and includes the component of sexual orientation and gender identity.”

The district will also introduce young teenagers to the “concept that sexuality is a broader spectrum.” By tenth grade, they will be taught that one’s sexuality “develops throughout a lifetime.”

“Emphasis will be placed on an understanding that there is a broader, boundless, and fluid spectrum of sexuality that is developed throughout a lifetime,” the document states. “Sexual orientation and gender identity terms will be discussed with focus on appreciation for individual differences.”

“Parents need to protect their kids from this assault,” said Andrea Lafferty, president of Traditional Values Coalition. “Who could imagine that we are in this place today – but we are.”

Last week, the school board voted to include gender identity in the district’s nondiscrimination policy – a decision that was strongly opposed by parents.

Lafferty, who led the opposition to the nondiscrimination policy, warned that the district is moving towards the deconstruction of gender.

“At the end of this is the deconstruction of gender – absolutely,” she told me. “The majority of people pushing (this) are not saying that – but that clearly is the motivation.”

School Board spokesman John Torre told the Washington Times the proposed curriculum changes have nothing to do with last week’s vote to allow boys who identity as girls to use the bathrooms and locker rooms of their choice.

He would have us believe it was purely coincidental.

To make matters worse, Lafferty contends parents will not be able to opt their children out of the classes because the lessons will be a part of the mandatory health curriculum.

However, Torre told me that parents will indeed be able to opt out of those classes “including the sexual orientation and gender identity lessons.”

I must confess that I’m a bit old school on sex education. I believe that God created male and female. My reading of the Bible does not indicate there were dozens of other options.

“They are not being forthright with the information,” Lafferty said. “They are not telling people the truth. They are bullying parents. They are intimidating and they are threatening.”

I must confess that I’m a bit old school on sex education. I believe that God created male and female. My reading of the Bible does not indicate there were dozens of other options.

However, I’m always open to learning new things – so I asked the school district to provide me with the textbooks and scientific data they will be using to instruct the children that there are dozens and dozens of possible genders.

Here’s the reply I received from Torre:

“Lessons have not been developed for the proposed lesson objectives,” he stated. “Because of the need to develop lessons, the proposed objectives would not be implemented until fall 2016.”

In other words – they don’t have a clue.

And the Family Research Council’s Sprigg said there’s a pretty good reason why they can’t produce a textbook about fluidity.

“It’s an ideological concept,” he told me. “It’s not a scientific one.”

He warned that Fairfax County’s planned curriculum could be harmful to students.

“It’s only going to create more confusion in the minds of young people who don’t need any further confusion about sexual identity,” he said.

The board will introduce the changes on May 21. Lafferty said she hopes parents will turn out in force to voice their objections.