Watch the Media Fumble Around For Terror Connections

In Spain today two men were arrested: Nou Mediouni and Hassan El Jaaouani. The media has been reporting this, widely describing the two men as having "similiar profiles to Boston suspects".

Read: Spanish police arrested two men they said may have ties to an al-Qaeda terrorist group in North Africa.

Surely these two must be Chechen, or suspected terrorists, or live in Boston, or really hate marathons?
No. 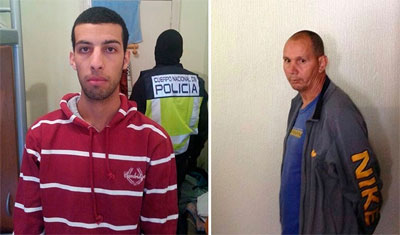 Watch the Canadian media outlet CTV stumble their way through their video report on the obvious non-issue. Show us the connections! (click here for video).

Interior Minister Jorge Fernandez Diaz assured reporters that there was "sufficient grounds" to arrest the men, and the police had been watching the two for the past year. But then it was revealed that:

1. They had no weapons of any kind
2. They had no contact and were not working together
3. They had made no plans for any attacks whatsoever

Diaz suggested they were "lone wolves", but didn’t report what ’lone wolf plots’ the two might be suspected of.

Further, the only ’evidence’ provided to warrant their arrest was allegedly a document found in one of the homes which purportedly "praised the Boston attacks".

Madrid is to stage its own marathon on Sunday. Authorities on Monday said that while no risk or threat had been detected, 1,100 police and security personnel would be on duty.

Officials are not aware of any connection between the two suspects and had no information that they possessed explosives or were planning any attack, a ministry spokeswoman said.

The two men are not related, they’re not Chechen, nor shown to be part of North African Al Qaeda, they seemingly had no intentions, motives, or capability of committing a crime.
So really the only connecting thread between this whole ’sting’ and the Boston bombings is that Madrid is having a marathon.

As usual, the news media is stretching truth in the extreme to try and hammer fear and anxiety into the masses.