Feb 13, 2010 Source: reuters.com
U.S.-led NATO troops launched an offensive on Saturday against the Taliban's last big stronghold in Afghanistan's most violent province and were quickly thrown into a firefight with the militants. 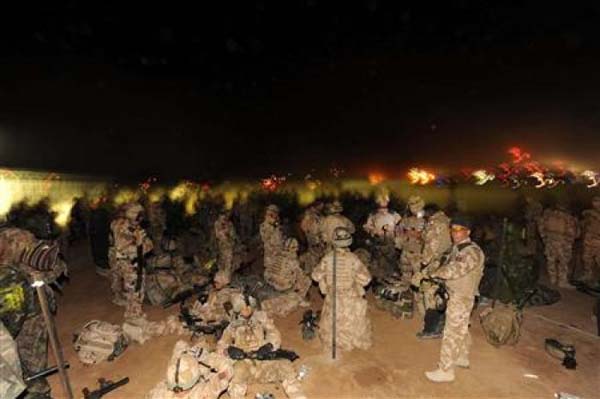 British soldiers from the First Battalion The Royal Welsh mobilize for Operation Moshtarak at Camp Bastion, Afghanistan, February 13, 2010.
Credit: REUTERS/SSgt Will Craig/The British Army/Handout
The assault is the first since President Barack Obama ordered a "surge" of extra troops to Afghanistan in December and the start of a campaign to impose government control on rebel-held areas this year, before U.S. forces start to withdraw in 2011.

Within hours of the operation getting underway, U.S. Marines at the tip of the assault battled with Taliban militants in the town of Marjah, the last big militant bastion in Afghanistan's violent Helmand Province.

Reuters reporter Golnar Motevalli saw Marines engaging in a firefight with Taliban fighters after the U.S. troops landed in helicopters near the city.

Marines fired at least four rockets at militants who attacked from compounds. At least one Marine was wounded by shrapnel.

"They are about 300 meters away," Motevalli said as the sound of assault rifles crackled in the background. Moments earlier, two large explosions resounded and a large black plume of smoke rose into the sky.

The offensive began with waves of helicopters ferrying U.S. Marines into the city in the early morning hours. British troops then flew into the northern part of the surrounding Nad Ali district, followed by tanks and combat engineering units.

The first objective of U.S. Marines was to take over the town center, a large cluster of dwellings, despite the risk of being blown up by bombs rigged by the Taliban.

Bursts of gunfire rattled through the area as servicemen anticipated their first contact with the militants.

By mid-morning, a couple of large explosions boomed, with a big plume of black smoke rising skywards. One was apparently an improvised rocket with plastic explosives designed to set off roadside bombs.

The 15,000-troop operation may have been named Mushtarak, or together, to highlight that NATO and Afghan forces were determined to work closely to bring stability to Afghanistan, a country often brought to its knees by one war after another.

Decades ago the Marjah area was home to an Afghan-American development project. Its canals, which criss-cross lush farmland, were built by the Americans.

Now NATO is trying to recapture it from a militant group that is highly unlikely to contemplate cooperation with the West.

"Insurgents who do not accept the government's offer to reintegrate and join the political process will be met with overwhelming force," the joint NATO-Afghan coalition said in a statement announcing the start of clearing operations.

A local Taliban commander, Qari Fazluddin, told Reuters earlier some 2,000 fighters were ready to fight in the densely-populated area.

The safety of civilians may be the vital issue for NATO in one of the eight-year-old war's biggest offensives against the Taliban, which have re-emerged as a powerful fighting force since they were toppled by a U.S.-led invasion in 2001.

Any heavy civilian casualties would make it even more difficult for the American-backed Afghan government to win support in towns that have been held by Taliban insurgents.

NATO forces have decided to advise civilians not to leave their homes, although they have said they do not know whether the assault will lead to heavy fighting.

Most residents of the area, estimated at up to 100,000, have stayed put. But others have headed 30 km (18 miles) east to the provincial capital of Lashkar Gah. "All the walls between the streets and houses are surrounded by bombs. Most people have gone to Lashkar Gah. That's where we want to go today," resident Abdel Aziz, 16, told the Marines through a translator.

Soon after, an old woman emerged from her house and asked the troops not to fire at it.

"This is just my house," she told the Marines.

Unlike previous military operations, the assault on Marjah has been widely flagged for months. Commanders say they hope this will persuade many fighters to lay down their arms or flee.

Residents have been afraid to leave their homes in fear of roadside bombs planted by the Taliban to slow the U.S. advance.

Marjah has been a breeding ground for both insurgents and opium poppy cultivation for years. Much may depend on whether the state can ensure long-term political and economic stability to erase the conditions that have encouraged militancy.