Why Does Hollywood Ignore White Slavery?

Jul 16, 2014 Source: takimag.com
The Los Angeles Times has congratulated Hollywood for congratulating itself for awarding the Best Picture Oscar to 12 Years a Slave. The gist of the article is that Tinseltown is finally taking “risks” and tackling “difficult subjects” such as black slavery. Why, it’s as if Roots, Django Unchained, Amistad, Lincoln, and Glory had never been made! It’s as if we aren’t helpless baby seals who are constantly clubbed over the head with the long-dead (in America, at least) institution of black slavery everywhere we turn, whether in kindergarten classes, on TV, in public monuments, and even in subway cars.

Black actor Danny Glover has been laboring for years to produce a film that treats the black Haitian genocide of the French as a heroic act, but there’s a still small voice inside me that says he won’t make a squeak about the allegation that French indentured servants in Haiti were said to be treated worse than black slaves and were often beaten to death.

Anytime someone dares shine a positive light on Thomas Jefferson, one is heckled with the unproved allegation that he fathered children with a black slave. This was treated as fact in the 1995 film Jefferson in Paris. Yet I can’t recall ever seeing a film that deals with the fact that in 1775, George Washington offered a reward for the capture and return of eight runaway white servants who’d escaped his clutches.

And for all the countless movies that have been made about black slavery in America—even old ones such as Gone With the Wind and The Birth of a Nation that are now considered blasphemous—I can’t ever remember seeing a film about white slavery. And when I say “white slavery,” I don’t mean sex trafficking—I mean the literal enslavement of white Europeans who were transported against their will to both Africa and America.

The telling of history is largely an exercise in guilt transference. Public perceptions of good guys and bad guys are shaped as much by what is taught as by what is omitted.

There are two types of ignorant people: those who don’t know, and those who know but choose to ignore. While nary a day goes by when our pink snouts aren’t rubbed in black slavery and the Holocaust, I can’t remember the last time the media made a peep about white slavery in the American colonies—nor even its more benign term, white indentured servitude. Then again, one can’t forget—nor even remember—what you don’t know about in the first place.

I can count at least one distant ancestor who was transported to the New World as an indentured servant. I’ve dealt with the white-hot topic of white slavery in my book The Redneck Manifesto and in a magazine article that was factually correct yet allegedly cost the magazine in question significant ad revenue from disgruntled White Slavery Deniers. And every time I’ve dared to raise the subject, I am shouted down, scoffed at, spat upon, pooh-poohed, and falsely accused of trying to say “Black slavery wasn’t bad.” My true motive is to say, “Hey, numskulls—you’re missing the big picture and creating poisonous levels of misunderstanding and resentment.” I’m only trying to show the similarities between white and black slavery, while others seem compelled to deny the similarities and focus exclusively on the differences. Interestingly, black people generally seem far more receptive to my humble mission. Then again, the false narrative that white people have never suffered is usually peddled by white people who have never suffered. Funny how that works.

Knowing my suggestions will be ignored, I will stubbornly sally forth and suggest two possible Hollywood adaptions of real-life white slavery. The first would involve the Barbary Coast and the estimated million-plus white Christians who were kidnapped by African Muslims and forced to endure hardships and torture that rival and may surpass what black slaves in America experienced. 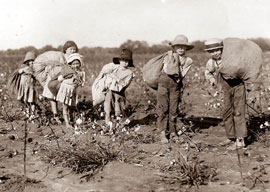 The second would be based on the book White Cargo. One in a long series of books and essays that have exhaustively documented this otherwise whitewashed phenomenon, White Cargo goes into great detail regarding the brutality of the white slave trade to America and how English and Irish adults and children were kidnapped, beaten, tortured, and worked to death in the New World. For a touch of personal pathos, the screenplay might focus on the tale of a skeleton that was discovered in a Maryland basement in 2003 “in a hole under a pile of household waste.” The remains are presumed to be those of a 16-year-old so-called white indentured servant who’d been worked to death and cast aside as white trash rather than given a proper burial. Let’s see that poor soul’s story up on the silver screen, Mr. Weinstein.

I won’t hold my breath. For now, the film industry’s moguls seem content to keep hammering down the nail that sticks up the most. It is a myopic and divisive strategy, yet division probably best serves their interests. The maniacal fixation on black slavery and the concomitant denial of white slavery is used both as a truncheon to instill universal white guilt and a crutch to explain away all black failure. To even acknowledge that white slavery happened would disrupt The Narrative, and once The Narrative is even slightly rewritten, the whole screenplay falls apart. And that would be the last thing Hollywood wants.