Why Earth may be entering a new Ice Age 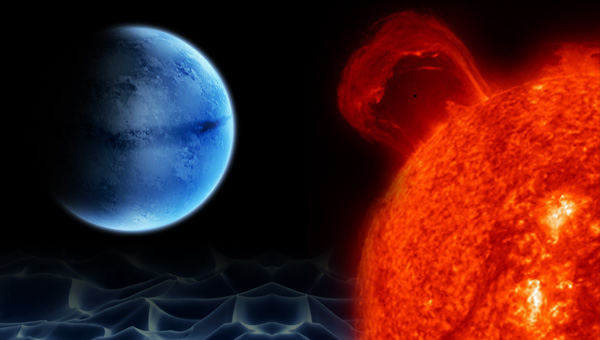 All data points to the sun as the primary source of short-term and long term climate change on Earth. While volcanic eruptions such as the current one in Iceland can affect short-term weather conditions over a region, planetary climate is governed by solar activity-or lack of it.

The first inkling that something had changed with the sun was the recognition of an abnormal sunspot cycle. Then, astronomers noted that all the planets were heating up-even little Pluto on the outskirts of our solar system.

While climatologists on Earth massaged the data to make it seem like man-made global warming was real, major climate changes were occurring on Mars.

During the peak of the global warming debate, the prestigious National Geographic Magazine published a ground-breaking article by Habibullo Abdussamatov in 2007, "Mars Melt Hints at Solar, Not Human, Cause for Warming, Scientist Says."

Habibullo Abdussamatov, an astrophysicist and head of space research at St. Petersburg's Pulkovo Astronomical Observatory in Russia, stated that solar activity caused the climate change on Earth and that observations of Mars revealed the shrinking of the carbon dioxide ice caps at the Martian South Polar region.

In that article, Abdussamatov explained: "The long-term increase in solar irradiance is heating both Earth and Mars." The scientist, accurate in past predictions, has recently pronounced his belief that Earth will enter a "little Ice Age: as early as 2014 and lasting as long as two centuries. The last one occurred between 1650 and 1850 and accounted for many crop failures, outbreaks of famines and mass migrations.

Abdussamatov contends, "Long-term variations in the amount of solar energy reaching the Earth are the main and principal reasons driving and defining the whole mechanism of climatic changes from the global warmings to the Little Ice Ages to the big glacial periods."

If his theory is true—and the International Space Station will be testing parts of it over the next six years—then use of hydrocarbon technology should not be diminished, but increased. Only through technological applications in growing economies would humanity be able to "to maintain economic growth in order to adapt to the upcoming new Little Ice Age in the middle of the 21st century," he asserts.

Whereas global warming would be a good thing (despite the gloomy forecasts) a mini-Ice Age could be disastrous: growing seasons would be shortened, more energy must be extended to stay warm, and food shortages may lead to breakouts of regional warfare.

"Observations of the sun show that as for the increase in temperature, carbon dioxide is not guilty." The Russian scientist is concerned about this move towards an extending cooling period. He states, "and as for what lies ahead in the coming decades, it is not catastrophic warming, but a global, and very prolonged temperature drop."

If Abdussamatov's calculation is true—and the observable and historical data seem to support it—then the countries of the world are moving exactly in the wrong direction to deal with an impending Ice Age. Al Gore notwithstanding, global cooling is much more dangerous than global warming.

"The observed global warming of the climate of the Earth is not caused by the anthropogenic emissions of greenhouse gasses, but by extraordinarily high solar intensity that extended over virtually the entire past century," Abdussamatov wrote. "Future decrease in global temperature will occur even if anthropogenic ejection of carbon dioxide into the atmosphere rises to record levels.

"Over the past decade," Abdussamatov warns, "global temperature on the Earth has not increased; global warming has ceased, and already there are signs of the future deep temperature drop."

"Look to Mars for the truth on global warming," Lawrence Solomon, Financial Post