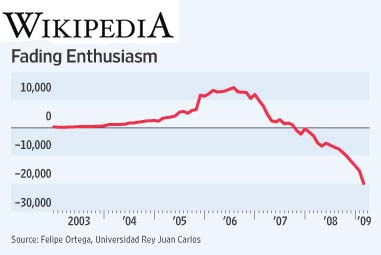 Observation: It is difficult to ignore the many complaints which we at the Thunderbolts Project receive about Wikipedia. The horror stories circulating recently about the way in which Wikipedia has been taken over, including experiences we can vouch for ourselves, really do suggest that the "people's encyclopedia" is moving rapidly toward a complete breakdown of confidence, particularly on subjects that challenge common theoretical assumptions or the "consensus" that underpins orthodox science. 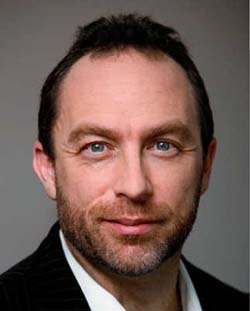 Jimmy "Jimbo" Wales' vision for Wikipedia:
“Imagine a world in which every single person on the planet is given free
access to the sum of all human knowledge. That's what we're doing.”
Image Credit: Wikimedia Commons
Let me first state that the concept upon which Wikipedia was founded is both noble and admirable, however the activity of some of its most prolific editors cannot easily be reconciled with the integrity of Jimbo's vision. It must be made clear that this article is NOT an attack on Wiklipedia, but an attempt to highlight the danger of collapse that this wonderful resource is likely to face if those running the show cannot curtail the actions of editors who have taken it upon themselves to exorcise any and all challenges to the present consensus. Challenges to the consensus are the lifeblood of progress in the sciences.

(PhysOrg.com) -- The findings of a Spanish study claiming that Wikipedia's editors are leaving at an alarming rate have been refuted by the Wikimedia Foundation and by Wikipedia co-founder Jimmy Wales.

The report by Dr Felipe Ortega, a research scientist with Madrid's Universidad Rey Juan Carlos, was published in the Wall Street Journal on 26 November. It reported a ten-fold increase in the number of editors leaving Wikipedia at the beginning of 2009 compared to the number in the equivalent period of 2008.

Wikipedia is open to contributions and relies entirely on volunteer contributors (editors), who create content, check the facts, correct errors and refine the entries in the online encyclopedia. Editors can contribute anonymously or can open a free account and become logged editors.

It should be made clear that whilst someone with a "free account" becomes a "logged editor" they still remain anonymous if they choose to, through the use of pseudonyms and Wikipedia rules about not "outing" editors. That is, not revealing their true identity even if this is known and pertinent to the discussion. This is a big problem when one considers another finding of the study, that:

... There was also a growing inequality in contributions becoming more biased towards a core of very active editors.

It is this bias which is a major concern, and could well account for editors leaving in droves. Quite simply, new editors are treated with contempt and discouraged from contributing if their edits are not consistent with the highly conventional beliefs of the editors who have seized control of particular topics.

A BBC (UK) report on the same study, quotes Wikimedia UK as saying that it is seeking more expert contributors:

“We're trying to engage a bit more at the moment with people who are very knowledgeable, people who are experts, so working with museums was the obvious next step,” said Michael Peel of Wikimedia UK

Yet we know of many instances of expert knowledge being ignored and editors being barred for attempting to improve articles on which they are knowledgeable, especially if the topic of discussion is something "alternative" and believe me, it doesn't have to sway much from textbook descriptions to be labelled alternative!

Take Eric Lerner, author of The Big Bang Never Happened, (Wikipedia username Elerner) for just one example. His biography reads more like a debunking of his ideas than an explanation of his life's work. A check on the "history" of the page, will show that user ScienceApologist is responsible for a large number of the edits of this biography. In fact, of the last 500 edits to the page, around 150 are by ScienceApologist! What does Lerner have to say about ScienceApologist?

Schoerder [sic] (scienceapologist) has been consisently attempting to make this article [Lerner's biography] as unfavorable to me as possible and eliminate anything favorable. He has a major conflict of interest because he is a graduate student in astronomy, working directly under astrophysicists who disagree with my work. He should be banned from editing this article. I would remind you that I was banned from editing the article on plasma cosmology because I work in that field. How can Scienceapologist be allowed to edit the article on me when he too now is in the same field, cosmology, and has made it his special task to attack anything that disagrees with what his professors think?Elerner (talk) 17:46, 30 March 2008 (UTC)

Here we see that Lerner is banned from editing Plasma Cosmology, a subject in which he is very knowledgeable, and for which he is widely known. Yet at the top of the article is this notice:

This article is in need of attention from an expert on the subject.

It is very difficult indeed to reconcile this situation with the comment above from Michael Peel. An expert in the subject is barred from editing it yet another editor with a clear conflict of interest and who is no expert in Plasma Cosmology has had more input to the article than any other single editor!

A quick look at one other topic. The biography of Halton Arp, famous for his Atlas of Peculiar galaxies and after whom a good number of same are named, includes a list of "categories" which the biography is said to belong in. I find it incredible that someone in the categories of 20th-century astronomers, 21st-century astronomers, American astronomers, Harvard University alumni, California Institute of Technology alumni and Indianna University is also in the category of fringe physics, especially as the fringe physics category is within the category of pseudoscience, defined as topics that have “very few followers and are obviously pseudoscientific (such as the modern belief in a flat Earth).” What an insult to one of the preemninent astronomers of the twentieth century, clearly the leading authority on peculiar galaxies. Who was it that added the fringe physics tag to his biography? No prize if you guessed correctly.

Read the full article at: Thunderbolts.info 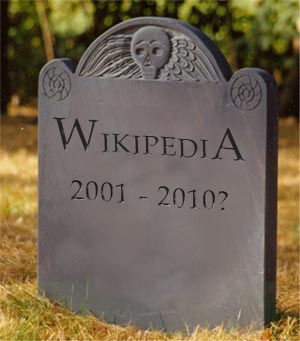